MAKERS OF A DISCIPLINE 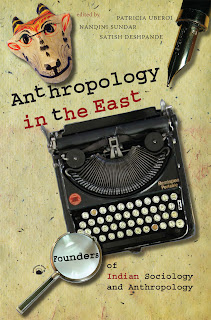 Anthropology in the East
Founders of Indian Sociology and Anthropology

Anthropology and sociology have long histories in India. Yet, with the exception of fieldwork experience, there is neither much available on the institutional and material contexts of these disciplines, nor on the practices of pioneering anthropologists and sociologists.

The present book fills an important gap. While the sociology of India is not purely a national phenomenon (scholars and centres studying India exist outside), and while Western theories have been important, this book shows that local influences and personalities played a major role in shaping the field.

The volume spans a century of life and work, from the late nineteenth to the late twentieth century, and focuses on scholars with varying research trajectories. However, it also shows the threads that bind these scholars: their common concern with nation-building, social reform, and the value of science.