First Full English Translation of One of India's Great Texts 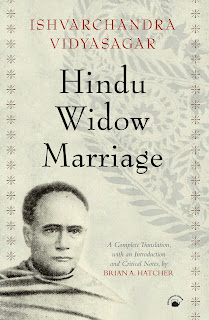 Hindu Widow Marriage
A Complete Translation
with an Introduction and Critical Notes
by Brian A. Hatcher
Vidyasagar, being one of the great Sanskrit scholars of his time and anxious to deploy  ancient Sanskrit scriptures to buttress his radical argument, wrote his two tracts advocating widow marriage in a highly sanskritized Bengali which, in the original, poses difficulties even to some of the major Bengali scholars of history today. Tanika Sarkar, Partha Chatterjee, and Sumit Sarkar are among the very many who have welcomed the appearance of this book. It makes available to every modern student, for the first time, one of the profoundest classics of India's social reform and gender discourse.
Before the passage of the Hindu Widow’s Remarriage Act of 1856, Hindu tradition required a woman to live as a virtual outcast after her husband’s death. Widows had to shave their heads, discard their jewellery, live in seclusion, and undergo acts of penance. Ishvarchandra Vidyasagar was the first Indian intellectual to successfully argue against these strictures. Renowned Sanskrit scholar and passionate social reformer, Vidyasagar was the leading proponent of widow marriage in colonial India, urging his contemporaries to reject practices that caused countless women to suffer.

Vidyasagar’s strategy involved a rereading of Hindu scripture alongside an emotional plea on behalf of the widow, resulting in the reimagining of Hindu law and custom. He made his case through a two-part publication, Hindu Widow Marriage, a tour de force of logic, erudition, and humanitarian rhetoric. In this new translation, Brian A. Hatcher makes available in English, for the first time, the entire text of one of the most important nineteenth-century treatises on Indian social reform.

An expert on Vidyasagar, Hinduism, and colonial Bengal, Hatcher enhances the original treatise with a substantial introduction describing Vidyasagar’s multifaceted career, as well as the history of colonial debates on widow marriage. He also provides an overview of basic Hindu categories for first-time readers, a glossary of technical vocabulary, and an extensive bibliography.
ISHVARCHANDRA VIDYASAGAR (1820–1891), the renowned Sanskrit scholar and reformer, one of the leading figures in the Bengal Renaissance, was responsible for transformations in everything from Bengali prose style and printing techniques to Sanskrit curriculum and Hindu social practice.

BRIAN A. HATCHER is Professor and Packard Chair of Theology in the Department of Religion at Tufts University. His research centres on Hinduism in modern India. He is the author of Idioms of Improvement: Vidyasagar and Cultural Encounter in Bengal; Eclecticism and Modern Hindu Discourse; and Bourgeois Hinduism, or the Faith of the Modern Vedantists: Rare Discourses from Early Colonial Bengal.
Hardback / 270pp / Rs 650 /  ISBN 81-7824-350-4 / South Asia rights only / Feb 2012
Copublished with Columbia University Press
Posted by PERMANENT BLACK at 20:22 No comments:

A PUBLISHING PERSPECTIVE ON THE A.K. RAMANUJAN CONTROVERSY