IN PRACTICE (Roll Over Aijaz Ahmad) 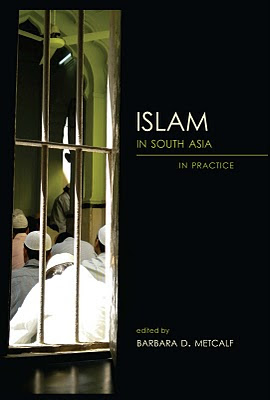 Islam in South Asia in Practice


This volume brings together the work of more than thirty scholars of Islam and Muslim societies in South Asia. It comprises a rich anthology of primary texts that contributes to a new appreciation of the lived religious and cultural experiences of the world's largest population of Muslims.

The thirty-four selections—translated from Arabic, Persian, Urdu, Bengali, Tamil, Gujarati, Hindavi, Dakhani, and other languages—highlight a wide variety of genres, many rarely found in standard accounts of Islamic practice, from oral narratives to elite guidance manuals, from devotional songs to secular judicial decisions arbitrating Islamic law, and from political posters to a discussion among college women affiliated with an “Islamist” organization.

Drawn from premodern texts, modern pamphlets, government and organizational archives, new media, and contemporary fieldwork, the selections reflect the rich diversity of Islamic belief and practice in South Asia. Each reading is introduced with a brief contextual note from its scholar-translator, and Barbara Metcalf introduces the whole volume with a substantial historical overview.

BARBARA D. METCALF is president of the American Historical Association. She is Professor Emeritus of History at the University of California, Davis, and most recently taught at the University of Michigan. She is the author of Islamic Revival in British India and coauthor of A Concise History of Modern India.

“Barbara Metcalf has helped transform the study of modern South Asian Islam by her insistence on close readings of texts; her attention to religious practice, institutions, and worldview; and her refusal to dismiss the concerns of South Asian actors. This edited volume, with its magisterial introduction, exemplifies these qualities while giving us access to a wide range of texts from throughout South Asia. She and her collaborators are owed great thanks.”—Juan Cole

“This is undoubtedly the richest collection of materials on South Asian Islam ever to be published in a single volume. What makes it so rich is its contributors' presentation and interpretation of primary texts, rather than any attempt to broach a synthetic narrative, however complex. This approach allows the book to be used in different ways: as an introduction to the wealth of Muslim texts and practices in South Asia, as a guide to scholarly debates on South Asian Islam, and as a reference. Barbara Metcalf's introduction is a masterpiece of lucid condensation.”—Faisal Devji

“This is a book of the first importance. It offers a way of engaging with Muslims and Muslim societies that takes them out of orientalist and political discourses and instead focuses on what Muslims actually say and do. It should form approaches to Islam among generations of students. Barbara Metcalf's masterly introduction gives the whole book a rich context infused with deep historical understanding.”—Francis Robinson

Posted by PERMANENT BLACK at 20:35 No comments: Links to this post

Telengana? But What About Telugu? 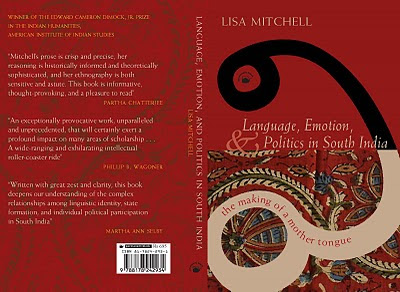 The Making of a Mother Tongue

Winner of the Edward Cameron Dimock, Jr., Prize in the Indian Humanities, American Institute of Indian Studies
What makes someone willing to die, not for a nation, but for a language? In the 1950s and 1960s a wave of suicides in the name of language swept through South India. This book asks why such emotional attachments to language appeared.

It answers by tracing shifts in local perceptions and experiences of language in general, and Telugu in particular, during the preceding century. Mitchell shows the emergence in India of language as the foundation for the reorganization of a wide range of forms of knowledge and practice. These included literary production, the writing of history, geographic imagination, grammatical and lexical categorizations, ideas about translation, and pedagogy. Newly organized around languages, these practices then enabled assertions of community and identity. Ultimately, by the early decades of the twentieth century, new linguistic identities had begun to appear ancient and natural rather than recent and invented. Indeed, though Andhra was created as independent India’s first linguistically defined state in 1952, diverse writings projected Indian linguistic identities backwards into a long past.

This is a fascinating study of linguistic identity, state formation, and political mobilization. It greatly enriches existing understandings of Indian history and politics.

LISA MITCHELL is Assistant Professor of Anthropology and History in the Department of South Asia Studies at the University of Pennsylvania.

“Mitchell’s prose is crisp and precise, her reasoning is historically informed and theoretically sophisticated, and her ethnography is both sensitive and astute. This book is informative, thought-provoking, and a pleasure to read.” —Partha Chatterjee

“An exceptionally provocative work, unparalleled and unprecedented, that will certainly exert a profound impact on many areas of scholarship . . . A wide-ranging and exhilarating intellectual roller-coaster ride.” —Phillip B. Wagoner

“Written with great zest and clarity, this book deepens our understanding of the complex
relationships among linguistic identity, state formation, and individual political participation in South India.” —Martha Ann Selby 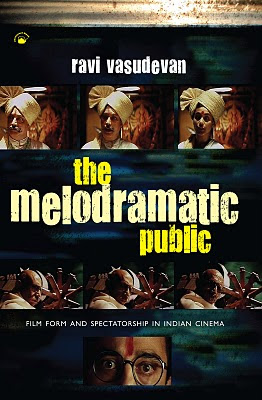 ‘Ravi Vasudevan’s innovative concept of the “imaginary public”, developed across these essays through close analysis of Indian cinema’s melodramatic practices and the socio-cultural conditions of their operation, recasts our understanding of the relation between text and context and offers a welcome new approach not only to the application of “melodrama” to Indian filmmaking but to theorization of cinema itself’—CHRISTINE GLEDHILL
Posted by PERMANENT BLACK at 14:26 No comments: Links to this post