The Indian Express has called it "perhaps the most important book to come out on India’s armed forces in  recent years." You can read the complete review here.

Army and Nation draws on uniquely comprehensive data to explore how and why India has succeeded in keeping the military out of politics, when so many other countries have failed. It uncovers the command and control strategies, the careful ethnic balancing, and the political, foreign policy, and strategic decisions that have made the army safe for Indian democracy. Wilkinson goes further to ask whether, in a rapidly changing society, these structures will survive the current national conflicts over caste and regional representation in New Delhi, as well as India’s external and strategic challenges. This is the most important book to have appeared on the Indian armed forces in more than four decades.

On 19th March 2015, 6.30 pm, India International Centre, Delhi, the author will give an illustrated lecture on his book, and Srinath Raghavan will chair. The event is open to all, please come. 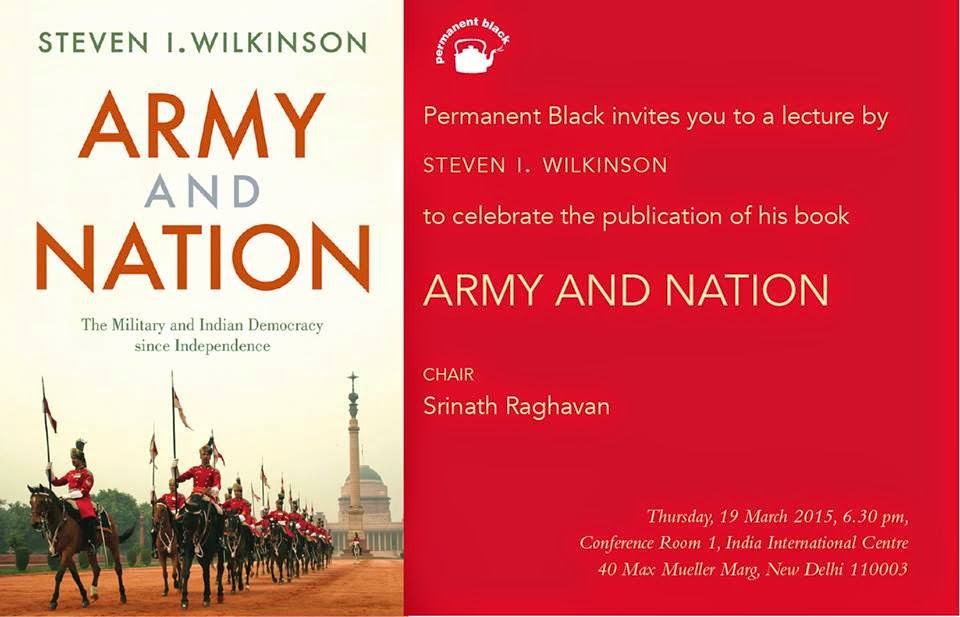 Steven I. Wilkinson is Nilekani Professor of India and South Asian Studies and Professor of Political Science and International Affairs at Yale University.

Srinath Raghavan is author of the acclaimed books, War and Peace in Modern India and 1971: A Global History of the Creation of Bangladesh. He is Senior Fellow, Centre for Policy Research, New Delhi, and Lecturer in Defence Studies at King’s College London.

To buy from the distributors, click here.
Posted by PERMANENT BLACK at 11:15 No comments: Links to this post 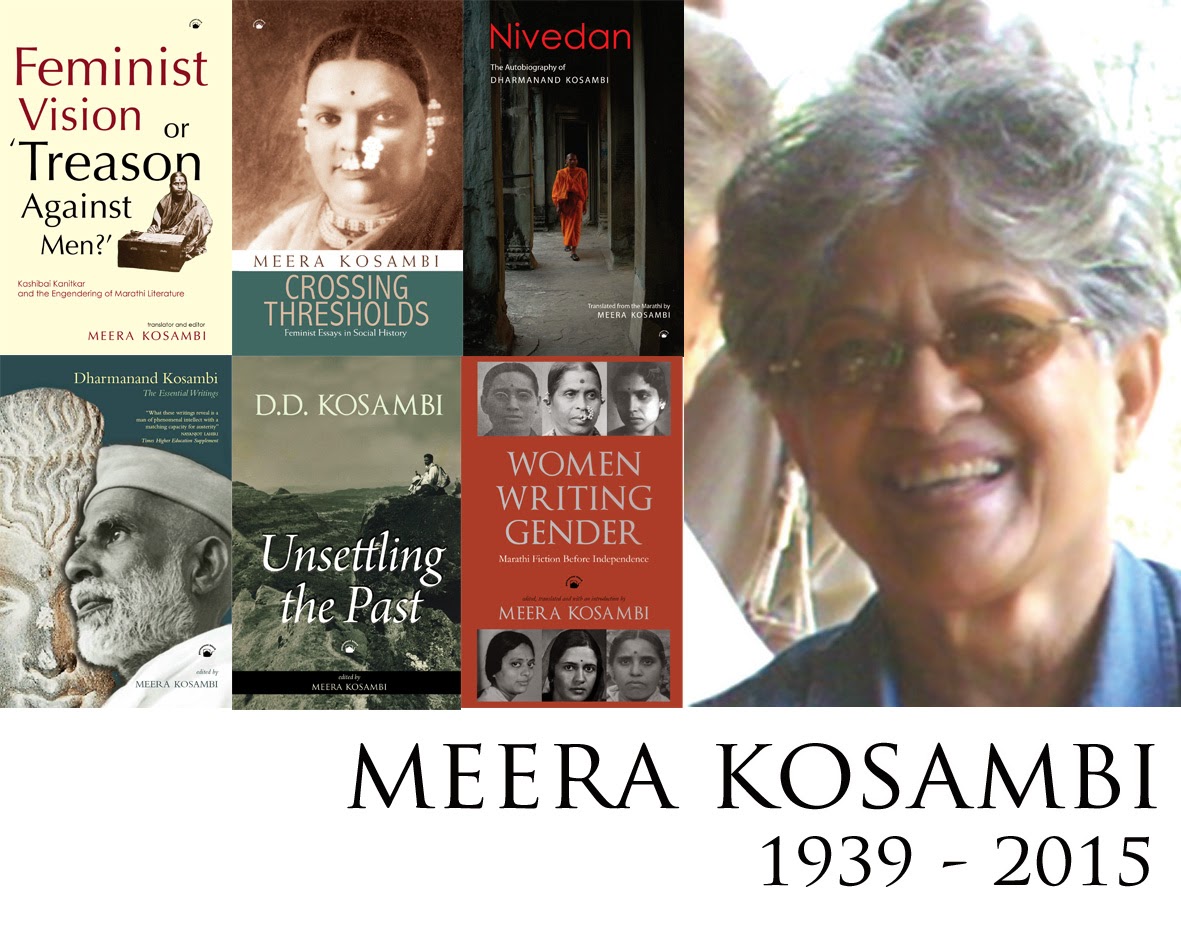 Over our many years of publishing Meera Kosambi's books, including her brilliant translation of the memoirs of Dharmanand Kosambi, the author became a friend with whom much was shared and exchanged. She will be deeply missed.

Noted sociologist Meera Kosambi, the youngest daughter of the great historian and mathematician D.D. Kosambi, passed away at a private hospital in Pune on Thursday after a brief illness aged 75.

Ms. Kosambi, who did not marry, had an illustrious academic pedigree. Her father, a polymath, was India’s pre-eminent Marxist historian, while her grandfather was the renowned Buddhist scholar and Pali language expert, Acharya Dharmananda Damodar Kosambi.

Ms. Kosambi, who did her Ph.D. in sociology from the University of Stockholm, wrote, co-wrote or edited more than 15 books which reflected a lifelong preoccupation and passion for with the notion of the modern, emancipated Indian woman.

While all her works are shot through with brilliant and incisive scholarship, Ms. Kosambi’s crowning achievement was to turn the light on Pandita Ramambai, the great 19 century Indian reformer and educationist and early pioneer of women’s emancipation in India.

Through her splendid translations of Returning the American Gaze: Pandita Ramabai’s the people of the United States (1889) and a volume of Ramabai’s Selected Works, Ms. Kosambi was instrumental in salvaging the great reformer’s reputation from the debris of time and restoring Pandita Ramabai to the pedestal of one of Modern India’s most illustrious figures.

She retired as a professor and director of the Research Centre for Women’s Studies, a post that she held for a decade, at the SNDT Women’s University in Mumbai.

From the Times of India

Sad news of the death of prominent sociologist, writer, and translator Meera Kosambi, in Pune on February 26, was received as
a double blow in her ancestral Goa. Many friends and admirers did not know she was ailing. The news was a shock.

There was also immediate recognition that an era had passed—76-year-old Meera Kosambi was the last living link to the prodigious intellectual legacy of her father, D D Kosambi, and her grandfather, Dharmanand Kosambi, who set out on foot from Sancoale in Goa in 1899 to found one of the greatest intellectual dynasties of the 20th century.

Every Indian schoolchild learns about the Tagores, but very few are taught about the Kosambis, despite three generations of truly exceptional achievement backed by pioneering work in multiple fields of research and scholarship. This 'recognition gap' can be attributed to the fact that the Kosambis stood alone, usually far ahead of their contemporaries.

The combined story of the Kosambis is almost unbelievable.

Dharmanand's powerful thirst for knowledge—first, about Buddhism—led him to leave his wife and infant daughter and walk out from Sancoale across the border of Portuguese India to Pune, then Varanasi, where he learned Sanskrit while subsisting like a mendicant.

He trudged to Nepal to study Pali, then to Sri Lanka where he was ordained a Buddhist monk. By 1910, he was working at Harvard University in the USA. After learning Russian, this intrepid Goan scholar went on to teach at Leningrad University as well.

Dharmanand returned to India to participate in the freedom struggle against the British. He was imprisoned for six years for his key role in the salt satyagraha. But he continued to write and teach about Buddhism—his influence led B R Ambedkar to convert.

When he sought to give up his life through voluntary fasting just before independence, Mahatma Gandhi prevailed upon him to reconsider, but Dharmanand was steadfast. He died at Sevagram in June 1947.

In the introduction to her masterly translations of 'the essential writings' of Dharmanand, Meera acknowledged: "I did not
know my grandfather", but sought to "claim him as an intellectual ancestor".

She did meet him as a child, and her rigorous, sensitive approach to translating his writings from Marathi —especially the spellbinding autobiographical 'Nivedan' —more than demonstrates a powerful connection.

Her last book 'Unsettling the Past: Unknown Aspects and Scholarly Assessments of D D Kosambi', was released in Goa in December 2013.

Meera's father was a spectacular polymath with major contributions to the study of ancient history, mathematics, Sanskrit literature, numismatics, and energy policy.

He graduated Phi Beta Kappa from Harvard in 1929, before returning to India and writing a long series of highly original papers—backed by painstaking, innovative fieldwork—that define the meaning of 'Renaissance Man'.

Just as Meera's terrific translations of her grandfather's work have proven integral to Dharmanand Kosambi's continuing relevance, her collection of D D Kosambi's writings secured her father's place in history.

The three essays on solar energy alone illustrate how far ahead he was of his time. If India had heeded him instead of his some-time nemesis Homi Bhabha, there is no doubt the country would be far ahead today.

The youngest link in the Kosambi intellectual chain was much more than merely the champion of her father and grandfather.

Meera was a strikingly distinctive feminist thinker and writer, as well as one of the most meticulous scholars and translators
of her generation.
Posted by PERMANENT BLACK at 15:23 No comments: Links to this post