The recipe for a sparkling evening 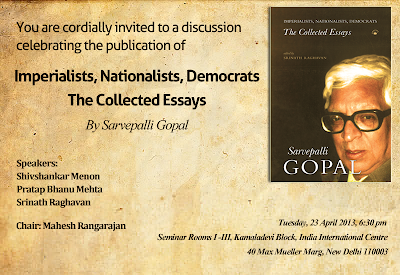 Please save the date, be there!


Posted by PERMANENT BLACK at 20:20 No comments:

THE UNBEARABLE LIGHTNESS OF BEING SUDIPTA?

‘Tannoy’ is not a word you’d expect to encounter in an academic essay. If the essay is by a Bengali academic, you might think it a typo for ‘Tanmoy’, or a misspelling of ‘to annoy’. Tannoy is not even a word that most people know: in fact those short of forty are quite likely never to have heard it. Like xerox and frigidaire, it began life as a manufacturing corporation and was driven by the singularity of its success into becoming a common noun—or, according to Wikipedia, a genericized trademark term for a public address system. Given the number and loudness of tannoys in India,  the nearness of the word with ‘to annoy’ seems serendipitous and might have excited Saussure no end. But we only know for a fact that it once excited a happy memory in Sudipta Kaviraj, for it features in an academic essay by him entitled ‘Reading A Song of the City: Images of the City in Literature and Films’.

The dry intellectual march of the standard academic essay is, once in a while, tripped up and enlivened by a different kind of narrative. The author digresses, dips into Wordsworthian reminscences of childhood, and recalls those days long ago when the need to earn his living in a university hadn’t stuffed his head so full of high thoughts and a specialized vocabulary. Evocatively episodic nostalgia of this type, in which the author allows memory freedom from filtration through Foucault & Co., is not infrequent in Kaviraj’s essays and hugely increases their readability. Permanent Black has published three superb ‘Ideas and Politics’ essay collections by him (The Imaginary Institution of India; The Trajectories of the Indian State; The Enchantment of Democracy and India), all now available in reasonably priced paperback editions. A fourth collection, comprising essays on ‘Literature and Ideas’, is under preparation and includes this essay which, temporarily keeping at bay Bankim and Rabindranath in the manner that Moses kept back the Red Sea, begins with this charming personal contextualization of subsequent politico-philosophical analysis:

The book will quite likely be called THE INVENTION OF PRIVATE LIFE: LITERATURE AND IDEAS. It will be worth waiting for. We hope to publish it before the year is over.
Posted by PERMANENT BLACK at 15:08 No comments:

ONE MORE BY SANJAY SUBRAHMANYAM, and don't bother counting