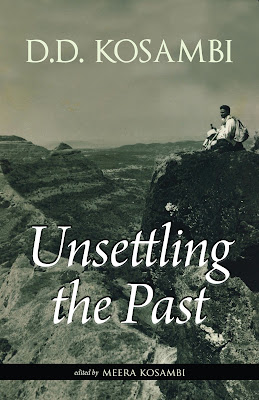 This is a collection of obscure and unknown writings by D.D. Kosambi alongside assessments of his contribution to various areas of scholarship -- ancient history, mathematics, Sanskrit literature, numismatics, and marxism as a method for understanding the past.

An array of the great man's unpublished letters, unearthed from the Harvard and TIFR archives by his daughter Meera Kosambi, comprises one section of the book. Kosambi's correspondence includes an exchange with Robert Graves on comparative aspects of Indian and Greek myth.

Almost no one has ever seen this cache of incredibly interesting letters which reveal new facets of Kosambi's insights, range of interests, methods, friendships, and affections. Some wonderful photos of Kosambi, mostly unavailable, also feature in the book. They reveal a man resembling a Greek god, 5 ft. 10 in. tall, who was humane, compassionate, and caring in unexpected ways, as for example in a photo showing him bathing one of his two dogs, Chatya. (The other one was called Bonzo, who too is revealed in the book.) Some people have it all: intellect, physique, Harvard education, bungalow in Poona ... Kosambi had it all by the spadefull. It comes almost as a relief to know that in later life he suffered from arthritis -- though even about his illness Kosambi is wonderfully blunt. In the last year of his life, in one of his letters to a Japanese collaborator, he writes presciently:  "I find that my health trouble has been due to long standing and apparently incurable virus infection. The main site is the sinuses, with secondary sites in the chest and bowels. The arthritis is a result of this, and so cannot be cured except by death."

While all the contributors in this book are in awe of Kosambi's intellect and the variety of his achievements, certain aspects of his work and its importance today are questioned. The extracts below suggest the directions of some of the essays in the book.