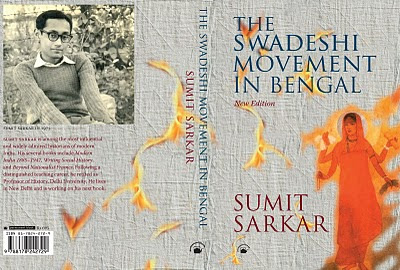 ‘From the moment of its first printing about thirty-five years ago, The Swadeshi Movement in Bengal has always held a special place in the historiography of modern India. Very few monographs, if any, have ever rivalled the meticulous research and the thick description that characterized this book, or the lucidity of its exposition and the persuasive power of its overall argument … Sarkar’s research improved on existing historiography in a major way by bringing out many unknown or hitherto neglected aspects of the history of the Swadeshi movement: the complex divisions that marked its different trends, the labour movement and mass mobilization of the period that few knew about in our time, Swadeshi anticipation of many of the Gandhian techniques of protest … this book, which should have enjoyed a steady and buoyant market over the years, has strangely remained “out of print” for about fifteen successive years. Its republication by Permanent Black is truly a cause for celebration.’—Dipesh Chakrabarty, University of Chicago

‘Sumit Sarkar’s story of Swadeshi brings out in fascinating detail, with a wealth of sources, all that he sees as heroic and tragic, sublime and quixotic, in those dramatic and eventful years in Bengal. We have here no simple story of success or failure, no celebratory account of great deeds and noble figures, no linear unfolding of events that lead step by step to a final climax. What we have instead is a picture painted in shades of grey in which black and white merge and separate in that in-between zone where the blackness of black comes under question as much as the whiteness of white.’—Neeladri Bhattacharya, Jawaharlal Nehru University

SUMIT SARKAR is arguably the most influential and widely admired historian of modern India. His several books include Modern India 1885–1947, Writing Social History, and Beyond Nationalist Frames. Following a distinguished teaching career, he retired as Professor of History at Delhi University. He lives in New Delhi and is working on his next book.

January 17, 2021
by Muzaffar Alam, Sanjay Subrahmanyam, Nayanjot Lahiri, Rukun Advani WATCH: Sunil Kumar speaking on Delhi   RUKUN ADVANI   Fourteen years ago, Sunil Kumar held a copy of his first big book in his hands: The Emergence of the Delhi Sultanate (Permanent Black, 2007). He hadn’t bothered trying to publish it with any of the big American or British university presses, though they’d all have taken it like a shot. It had been very long since anything substantially new and eye-opening had been written on the Delhi Sultanate, and Sunil, reckoned a dilatory perfectionist whose motto was much too fervently “Better Never Than Now”, was known to have been writing it for more than a decade. He could have had his pick of publisher. Some years later, he emailed saying he’d had enough of being a Reader at SOAS. He could have been in London forever, or moved on from there to the redder-leaved pastures of the Ivy League. By this time his book had brought him recognition as a s
Post a Comment
Read more

January 18, 2021
SUVIR KAUL Yes, I know that Sunil did a great deal to change the way in with the period of early Islamic rule in North India is understood: he thought of authority in terms of processes and flows, not as singular and unchanging; he did not think of the imposition of Muslim rule over a Hindu land, but demonstrated the multiple motivations that guided local rulers to consolidate their power, including their attempts to define themselves against the confessional, juridical, and philosophical ideas they had inherited; he believed in reading archives creatively and fully, rather than mining them selectively for evidence to buttress prior, and inevitably, partisan, ideas. But there is so much more before all that: There is the walk on the roof of the dining hall at St. Stephen’s College, where both of us, dressed in black trousers and white kurtas, acted as the minor guards bringing up the rear when Hamlet and Horatio see the ghost of Hamlet’s father (we cowered most effectively, we thou
Post a Comment
Read more