THE TIMES OF HINDUSTANI: Bharatendu to Manto, via Premchand 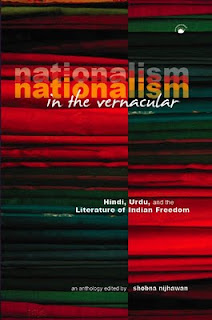 SHOBNA NIJHAWAN, EDITOR
Nationalism in the Vernacular
Hindi, Urdu, and the Literature of Indian Freedom

with Introductions by Vasudha Dalmia and Christopher Shackle


This anthology comprises a selection of formative literary writings in Hindi and Urdu from the second half of the nineteenth century, leading up to Indian Independence and the creation of Pakistan. The texts here are mostly hitherto unpublished translations into English.

The anthology provides a picture of how nationalism—as a cultural ideology and political movement—was formed in literature. Unlike other anthologies, this one focuses on writings in two North Indian vernaculars with a contested relationship: Hindi and Urdu. The combination is deliberate: the relationship of Hindi and Urdu was being consolidated and sealed even as these texts were being written.

There are two separate Introductions to this anthology. Each grounds, respectively, the peculiar paths taken by Hindi and Urdu proponents and practitioners. The anthology emphasizes the shared ground of Hindi and Urdu. The Hindi and Urdu texts are arranged into eight thematic clusters, each represented by a nationalist mode of reasoning. Autobiographical writings in Hindi, prison poetry in Urdu, and social reform writings around gender, caste, class, and Dalits are also included in this fascinating collection.

SHOBNA NIJHAWAN teaches Hindi at York University in Canada. Her PhD, on women’s Hindi journals and nationalism, was from the University of California, Berkeley. Her special areas of interest lie in South and Southeast Asian Studies (Hindi/Urdu), with an emphasis on women, gender, and sexuality.