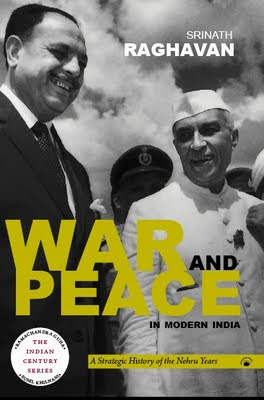 War and Peace in Modern India

A Strategic History of the Nehru Years

During his seventeen years as prime minister, Jawaharlal Nehru led India through one of its most difficult and potentially explosive periods in international affairs. As the leader of a new state created amidst the bloodiest partition in history, saddled with new and outstanding problems, Nehru was confronted with a range of disputes which threatened to boil over.

Srinath Raghavan draws on a rich vein of untapped documents to illuminate Nehru’s approach to war and his efforts for peace. Vividly recreating the intellectual and political milieu of the Indian foreign policy establishment, he explains the response of Nehru and his top advisors to the tensions with Junagadh, Hyderabad, Pakistan, and China. He gives individual attention to every conflict and shows how strategic decisions for each crisis came to be defined in the light of the preceding ones. The book follows Nehru as he wrestles with a string of major conflicts—assessing the utility of force, weighing risks of war, exploring diplomatic options for peace, and forming strategic judgements that would define his reputation, both within his lifetime and after.

‘War and Peace in Modern India is a major contribution to both history and international relations. In this book, Srinath Raghavan breaks new ground in his research, and in his arguments. He convincingly demonstrates that when it came to protecting India’s security and national interests, Nehru was far more of a “realist” than had previously been supposed. At the same time, his book greatly illuminates the process of state-formation in a large, complex, diverse, and newly independent country. It will influence scholarly debates for years to come.’ — Ramachandra Guha, author of India after Gandhi

‘In this important and readable book, Srinath Raghavan breaks new historical ground with a thorough and acute analysis of Nehru's foreign policy, demonstrating the subtlety and confidence with which he approached the various crises he faced as India's Prime Minister until he was caught out by China.’— Sir Lawrence Freedman, Professor of War Studies and Vice Principal, King’s College London