WHEN DOES HISTORY BEGIN?

Religion, Narrative, and Identity in the Sikh Tradition 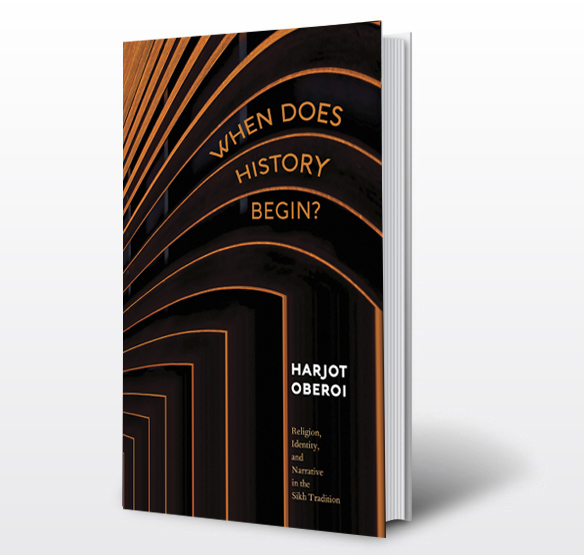 After a spell away because of lockdowns and printing holdups, we are back with long-awaited title. It was originated and edited here at Permanent Black, and we have sold rights for the world except South Asia to State University of New York Press (SUNY) which will publish it for North America and elsewhere.

Read an excerpt in Scroll

Indian historiographical praxis has long been problematic. Al-Biruni, the eleventh-century polymath, was puzzled by how people in the subcontinent treated the protocols of history, not seeing that Indian narratives of the past, embedded in kavya traditions, represented a radical departure from historical narratives in the Islamic, Sinic, and Greco-Roman worlds. Where others tended to search for “facts”, people in South Asia looked for “affect”. This alternative for comprehending and evaluating the past – through aesthetics and gradients of taste – generated a different variety of historical consciousness.

Focusing on important issues in Sikh religious identity and memory, Harjot Oberoi shows what modern critical narrative achieves when it moves away from classical models of historiography. His examination of the Sikh tradition traverses significant moments in colonialism, encounters with modernity, coercion and protest in the Raj, the production of knowledge, the rise of secular nationalism, and modern notions of the self within and outside India.

This book on the variousness of truth-telling practices, ideas of the sacred, and sentiment-laden presuppositions asks us to look afresh at the writing of history – centrally in India, but also across the world.

HARJOT OBEROI, Professor of South Asian Studies at the University of British Columbia, Vancouver, is the author of The Construction of Religious Boundaries: Culture, Identity and Diversity in the Sikh Tradition (University of Chicago Press and OUP Delhi, 1994), a classic work of modern Indian history which was awarded the Best First Book in the History of Religions Prize by the American Academy of Religion in 1995. His writings have appeared in Studies in History, Modern Asian Studies, Pacific Affairs, Panjab Past & Present, Journal of Sikh Studies, Economic and Political Weekly, Biblio, and The India Forum.