SARTOR RESARTUS: ENTERTAINING SCHOLARSHIP ON EVERYTHING THAT PERRY ANDERSON KNOWS NOTHING ABOUT

When the influential Marxist historian Perry Anderson ventured into Indian territory, he did not bargain for this . . . 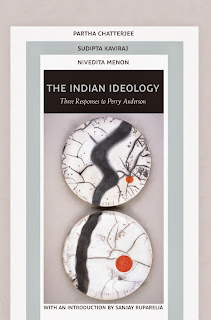 With an Introduction by Sanjay Ruparelia

Within the large array of responses to Anderson that appeared, three stand out for the care and comprehensiveness with which they show the levels of ignorance, arrogance, and misconstruction on which the Andersonian variety of political analysis is based. Collectively, these three ripostes represent a systematic critique of the intellectual foundations of The Indian Ideology.

Confronting Anderson’s claim to originality, Nivedita Menon exposes his failure to engage with feminist, Marxist, and Dalit scholarship, arguing that a British colonial ideology is at work in such analyses. Partha Chatterjee studies key historical episodes to counter the “Great Men” view of history, suggesting that misplaced concepts from Western intellectual history can obfuscate political understanding. Tracing their origins to the nineteenth-century worldview of Hegel and James Mill, Sudipta Kaviraj contends that reductive Orientalist tropes such as those deployed by Anderson frequently mar European analyses of non-European contexts.

Vigorous polemic merges with political analysis here, and critique with debate, to create a work that is intellectually sophisticated and unusually entertaining.

partha chatterjee is Professor of Anthropology and South Asian Studies, Columbia University, New York, and Honorary Professor, Centre for Studies in Social Sciences, Calcutta. His many books include Nationalist Thought and the Colonial World (1986), The Nation and Its Fragments (1993), A Possible India (1997), The Politics of the Governed (2004), Lineages of Political Society (2011), and The Black Hole of Empire (2012).

sudipta kaviraj is Professor of Indian Politics and Intellectual History at Columbia University. He taught for many years at SOAS, London University, following a long teaching stint at Jawaharlal Nehru University, New Delhi. He has been a Fellow of St Antony’s College, Oxford, and a visiting professor at the University of California, Berkeley, as well as at the University of Chicago. His most recent books are The Invention of Private Life (2014), The Trajectories of the Indian State (2012), The Enchantment of Democracy and India (2011), and The Imaginary Institution of India (2010).

nivedita menon is Professor, Centre for Comparative Politics and Political Theory, Jawaharlal Nehru University, New Delhi. She is the author, most recently, of Seeing like a Feminist (2012) and editor (with Aditya Nigam and Sanjay Palshikar) of Critical Studies in Politics: Exploring Sites, Selves, Power (2013). An active commentator on contemporary issues in newspapers and on the blog kafila.org, she has translated fiction and nonfiction from Hindi and Malayalam into English.

sanjay ruparelia is Assistant Professor of Politics at the New School for Social Research, New York. His publications include Divided We Govern: Coalition Politics in Modern India (2015), and Understanding India’s New Political Economy: A Great Transformation? (2011).