Ranajit Guha is 90 years old on 23 May 2013. We give below the first of several short birthday tributes to him. 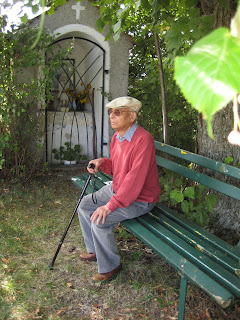 Richard Price is Ranajit Guha’s first PhD student. He is at the University of Maryland, College Park, USA.

I first encountered Ranajit Guha as a second year undergraduate at the University of Sussex in 1964.  I had always been interested in the history of the British Empire, and when he offered a class on “European Imperialism from 1870” I enrolled.   He became my mentor;  he served as my D.Phil. advisor, even though my topic (British working class attitudes towards imperialism in the late nineteenth century) was far from his main area of interest in Indian History.
From the very start Ranajit held a charismatic attraction for me.  Part of this, it must be admitted, lay in the exotic aura that he projected.  He was the first person I had ever encountered who had been part of the struggle for colonial freedom; he had been jailed by the British; and for many years he was active in the Young Communists of India.  More than this dramatic personal history, however, was the scholarly intellect that he modeled.  There were five key qualities that Ranajit Guha the historian embodied that were formative for my own thinking and for the way I try to practice history.
The first was how he treated history as something that could be thought about conceptually, as a process, and not as just a narrative progression.  His undergraduate course on  European Imperialism, for example, was not the usual course that began with the age of explorations.  It began instead with the theorists of empire and then went on to study the British, French and German cases within that context.  Ranajit was the first person to teach me that the problems of history could be conceptual, rather than being a problem of events,
Second, was the suppleness and rigor of his intellect. Ranajit demonstrated how theoretical conceptualization and rigorous archival investigation were not separate activities, but necessarily intertwined.  His own historical writings have provided elegant examples of that lesson.  A Rule of Property for Bengal is thus both an intellectual history and a study in the history of political economy.  And the rich social history of Elementary Aspects of Peasant Insurgency in Colonial India provides the foundations for a typology of subaltern rebellion.
Third, there was a spare asceticism to Ranajit’s intellectual being.  I remember how he told me that he had spent one cold English Christmas shut away in his apartment grappling with Ludwig Wittgenstein’s Philosophical Investigations.  I was not surprised.  Ranajit was perhaps the first person I met who privileged the world of the mind over virtually everything else; who demonstrated that being an historian was in itself a full-time profession.
Fourth, and related to this, was an independence of mind and position that Ranajit projected.  He conveyed the importance of following one’s own star and standing as much apart as was possible from the seductions of professional pressures and fashions.  Ranajit is one of the few people I know whose stature in the world of professional history has been attained entirely on his own terms.  He has followed his own path throughout his life.
And finally the single most lasting lesson I took from Ranajit was both small and large.  It was the importance of clarity and precision in writing.  The first essay I submitted to him was returned covered with red ink corrections of grammar, syntax and style.  I had never experienced such criticism before, and it was a salutary lesson in the significance of writing for thinking.    Until very recently, whenever I picked up a pen the memory of that experience come flooding back.  It was as if Ranajit was there to remind me that the business of writing history was no light or frivolous matter, but was a serious duty and responsibility.