CIVILIZATION AND ITS DISCONTENTS? WELL, ALMOST ...

May 10, 2013
Incisive review of
CITIZENSHIP AND ITS DISCONTENTS
by Niraja Gopal Jayal 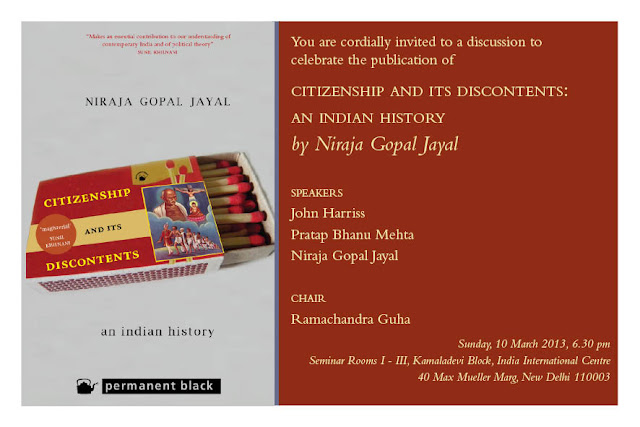 in conversation about Citizenship and its Discontents.
IIC, 6.30 p.m. All are welcome.

Citizenship and Its Discontents

Breaking new ground in scholarship, this is the first history of citizenship in India.

Unlike the mature democracies of the West, India began as a true republic of equals with a complex architecture of citizenship rights that was sensitive to the many hierarchies of Indian society. In this provocative biography of the defining aspiration of modern India, Jayal shows how the progressive civic ideals embodied in the constitution have been challenged by exclusions based on social and economic inequality, and sometimes also, paradoxically, undermined by its own policies of inclusion.

Citizenship and Its Discontents explores a century of contestations over citizenship from the colonial period to the present, analysing evolving conceptions of citizenship as legal status, as rights, and as identity.

The early optimism that a new India could be fashioned out of an unequal and diverse society led to a formally inclusive legal membership, an impulse to social and economic rights, and group-differentiated citizenship. Today, these policies to create a civic community of equals are losing support in a climate of social intolerance and weak solidarity.

Once seen by Western political scientists as an anomaly, India today is a site where every major theoretical debate about citizenship is being enacted in practice, and one that no global discussion of the subject can afford to ignore.

Niraja Gopal Jayal is Professor at the Centre for the Study of Law and Governance at Jawaharlal Nehru University, India.

“The idea of citizenship in India promised inclusive community, but the country's enlivened politics have transformed that promise into a more fragmentary, divisive reality. In this magisterial analytic history, Niraja Gopal Jayal maps for the first time the concept's vicissitudes, and makes an essential contribution to our understanding of contemporary India and of political theory.”—Sunil Khilnani,
King’s India Institute

“A contribution to our understanding of citizenship and democracy in India that is empirically rich and theoretically sophisticated.”—Amrita Basu, Amherst College