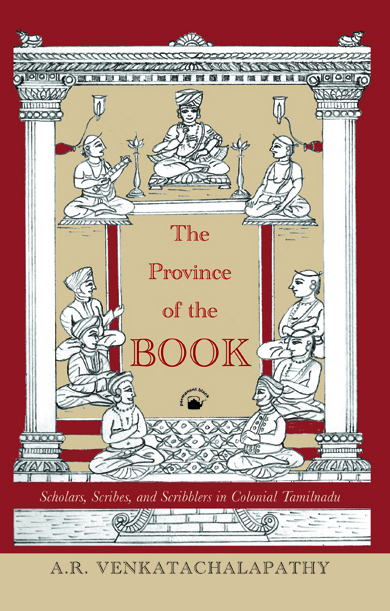 A.R. Venkatachalapathy
The Province of the Book
Scholars, Scribes, and Scribblers in Colonial Tamilnadu

A.R. Venkatachalapathy, though still a young scholar by Indian standards, has been hailed as a savant of sorts for his knowledge of the culture, politics, and history of Tamilnadu. Of his wide and varied reading there is no lack of evidence within his new monograph just published by Permanent Black. This work, which focuses on the history and culture of books, book publishing, and book reading in Tamilnadu from the time of parchment to the time of Pagemaker, is interesting from the word go: it starts with four satirical epigraphs, three of which run as follows:
In this age, when printing machines have become legion and the business in paper has expanded, novels have started to proliferate like termites.—review in Lakshmi (1924)
Brother, listen to me. Take up some other occupation: never pursue this wretched profession of writing. Show me one person [in Tamilnadu] who has grown rich writing books and essays. How does it matter to us that Shaw and Chesterton have become millionaires by writing?—Kalki (1931)
Two books sell the most in our society: one, the almanac; the other, the railway timetable.—C.N. Annadurai (1950)

Sumit Sarkar and Ramachandra Guha have this to say about Venkatachalapathy and his book:

This is a pioneering work of a kind of social history that has been all but non-existent in our country, and [A.R. Venkatachalapathy] has brought to it a combination of scholarly diligence, command over extremely diverse kind of sources, a perceptive and analytical mind, and considerable awareness of international trends in history-writing.—Sumit Sarkar
In this superb work, A.R. Venkatachalapathy explores the diverse but interlinked worlds of  the printing, publishing, patronage, and reading of books. These worlds are treated with attention and care, as well as located within a wider social history of the Tamil country. Not least among the book’s many pleasures is its skilful decentring of Indian historiography away from the over-studied province of Bengal and towards other regions that are as interesting.  This model work of scholarship will confirm Venkatachalapathy’s standing as the most accomplished historian of his generation. —Ramachandra Guha
To coincide with the appearance of this book, which is utterly absorbing and seems certain to be recognized as a classic contribution to Indian cultural history, we asked Paula Richman, renowned Tamil scholar and Danforth Professor at Oberlin College, to converse briefly with Venkatachalapathy. Their conversation appears below.

A BRIEF DESCRIPTION OF THE BOOK AND THE AUTHOR:

The first Indian language book ever to be printed was in Tamil, in 1577. After many fits and starts and some spectacular achievements, print and the culture of book publishing became well-recognized facets of Tamil society during the late colonial period. The Province of the Book explores the wonderful world of scholarly and subaltern publishing—especially popular fiction and street literature—in its heyday.

The basis of Tamil book publishing was, to begin with, the patronage of writers by the local nobility and affluent Hindu monastic orders. Such patronage was eroded by the socio-economic transformations which came with colonialism. During the period of transition which resulted, attempts were made to create a market for Tamil books, with local writers not knowing where to turn for a living. It was only with the rise of the novel and a reading middle class—including young women and housewives—which finally broke the stranglehold of patronage, allowing Tamil publishing to grow into the market venture that it is today.
This is a brilliant and pioneering work which reconstructs a universe hitherto unknown— the world of the Tamil book. It shows famous and unknown authors at work, the religious literati with its cortège of students, radical nationalist poets such as Subramania Bharati rousing the masses and being crushed in the process, humble scribblers eking out a livelihood writing bazaar pamphlets, successful scribes compiling anthologies for students and astrological wisdom for the credulous, and the ubiquitous English official surrounding them all—censoring, adjudicating, dictating.
The book also looks closely at reading practices, modes of reading, and the nature, numbers, and composition of book readers. Its epilogue traces the broad contours of Tamil publishing from the time of Independence to the present and speculates on the future of the Tamil book.
Monographs on the history of the book in India are seldom as conversant with the international literature on the subject as this one. A.R. Venkatachalapathy’s work dazzles because he is au fait not just with the history and culture of publishing in Tamilnadu but equally in France, Britain, and the USA. The archives he has mined reveal government documents, pamphlets, tracts, periodicals, manuscripts, catalogues, bibliographies, reviews, advertisements, letters, and even account ledgers.
In short, this book will fascinate anyone interested in history, sociology, cultural studies, and the media, and prove indispensable for students of book history and publishing cultures.
A.R. VENKATACHALAPATHY is Professor at the Madras Institute of Development Studies, Chennai. He has taught at Manonmaniam Sundaranar University, Tirunelveli; Madras University; and the University of Chicago; and has held research assignments in Paris, Cambridge, London, and Harvard, and served as ICSSR Professor at the National University of Singapore. An accomplished Tamil writer, he has published widely on the social history of Tamilnadu. His publications include In Those Days There Was No Coffee: Writings in Cultural History; and, as editor, Chennai, Not Madras; In the Tracks of the Mahatma: The Making of a Documentary; and Love Stands Alone: Selections from Tamil Sangam Poetry.
Hardback / 320pp / Rs 795 / ISBN 81-7824 - 331-8 / World rights / December 2011