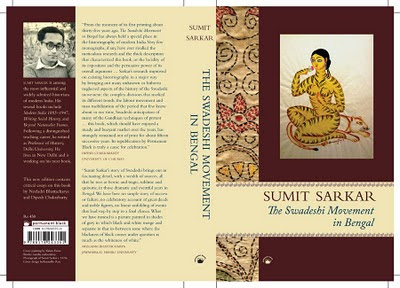 The Swadeshi Movement in Bengal


Widely hailed by historians as the first great and pioneering monograph in Modern Indian History (many maintain it has never been surpassed) Sumit Sarkar's The Swadeshi Movement in Bengal (1973) was unavailable for nearly fifteen years before its republication in a new edition in 2010 by Permanent Black. This was thanks very substantially to the efforts of Tanika Sarkar in obtaining copyright back from the original publisher ... but that's another story (it should feature in Tanika Sarkar's autobiography, if she writes one).


The new Permanent Black edition has been freshly typeset and looks much more elegant than the first edition. It also contains plenty of great new material in the form of a long new preface by Sumit Sarkar reflecting on changes in Indian historiography over the 35 years since he wrote his first major book, as well as two brilliant essays contextualizing and outlining the importance of this book by Neeladri Bhattacharya of JNU and Dipesh Chakrabarty of Chicago.

The hardback having sold out, the paperback is publishing in the summer of 2011 with the beautiful new cover design above (including a rare photo of Sumit Sarkar at the time that he wrote Swadeshi Movement).

This coincides happily with the first paperback printing of Sumit Sarkar and Tanika Sarkar's edited reader in two volumes, Caste and Social Reform in Modern India, which has sold out two hardback printings.

As is well known in the academic world, Sumit Sarkar fell very ill a couple of years back and his survival and wonderful recovery have been something of a miracle. You can say the same for his Swadeshi Movement in Bengal, a book that needs to be read by every student and scholar of Indian history.
Swadeshi Movement: paperback / 506pp / Rs 450 / World rights
Caste and Social Reform: paperback / 940pp in 2 vols / Rs 895 for set of 2 vols / South Asia rights