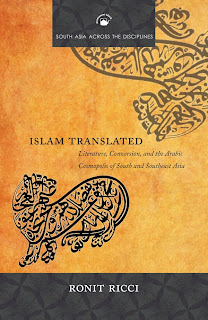 The spread of Islam eastward into South and Southeast Asia was one of the most significant cultural shifts in world history. As it expanded into these regions, Islam was received by cultures vastly different from those in the Middle East, incorporating them into a diverse global community that stretched from India to the Philippines.

In Islam Translated, Ronit Ricci uses the Book of One Thousand Questions—from its Arabic original to its adaptations into the Javanese, Malay, and Tamil languages between the sixteenth and twentieth centuries—as a means to consider connections that linked Muslims across divides of distance and culture. Examining the circulation of this Islamic text and its varied literary forms, Ricci explores how processes of literary translation and religious conversion were historically interconnected, mutually dependent, and creatively reformulated within societies making the transition to Islam.


Islam Translated will contribute to our knowledge of this region of the Muslim world that remains crucially important to world affairs.
RONIT RICCI has a PhD in Comparative Literature from the University of Michigan and is a lecturer at the Australian National University. Her interests include South and Southeast Asian cultures, literary transmission, and conversions to Islam.

“combines scrupulous examination of textual shifts, concepts, imagery, and genre with a tremendously persuasive argument and a stimulating reading of the differences in translation process between languages and cultures. This book helps us to understand the differing ways in which Arabic and Arabic writings moved into other literatures and takes readers through a rich and detailed journey of imagery and language”—Michael C. Gilsenan, New York University

“a trail-blazing study about the dynamics of writing within the Arabic cosmopolis around the Indian Ocean”—Hendrik Maier, University of California, Riverside