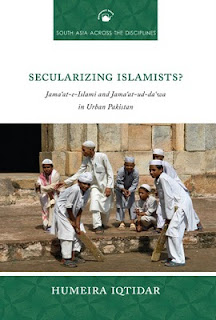 Secularizing Islamists? provides a thorough analysis of two Islamist parties in Pakistan, the highly influential Jama‘at-e-Islami and the more militant Jama‘at-ud-Da‘wa, widely blamed for the November 2008 terrorist attack in Mumbai. Basing her findings on ethnographic work with the two parties in Lahore, Humeira Iqtidar says that these Islamists are involuntarily facilitating secularization within Muslim societies, even as they vehemently oppose secularism.

This book offers a fine-grained account of the workings of both parties. It challenges received ideas about the relationship between the ideology of secularism and the processes of secularization.

Iqtidar illuminates the impact of women on Pakistani Islamism while arguing that these Islamist groups are inadvertently supporting secularization by forcing a critical engagement with the place of religion in public and private life. She highlights the role that competition among Islamists, as well as the focus on the state as the center of their activity, play in assisting secularization.

The result is a significant contribution to our understanding of emerging trends in Islam and politics within South Asia.

HUMEIRA IQTIDAR is a lecturer in politics at King’s College, London. Her research is in social and political theory relating to secularism, citizenship, religion, the state, and the market.

“The real strength of Secularizing Islamists? is the depth of its empirical research, both historical and anthropological—there is no other work that brings such a range of materials to a study of Islamism in contemporary Pakistan. Here, Humeira Iqtidar offers a compelling historical argument that demonstrates how Islamist movements in Pakistan have long relied upon processes of social and political secularization. This important book will have a wide readership across the social sciences and humanities and will be of interest to students of South Asian history and culture, the history of secularism, modern and contemporary Islamic studies, as well as policy professionals worldwide who are concerned with Islamic radicalism.”—Aamir Mufti

“At the heart of this book is an incongruous question: what would happen if we analyzed Islamists (who define themselves in almost polar opposition to ‘secularism’) as products of a process of ‘secularization’? What happens is not a definitive new interpretation of Islamism, but rather the suggestion of a range of new questions and perspectives for looking at Islamist thinking in its political and everyday contexts. Broad, original, and interdisciplinary, this book will find an important audience among a large number of scholars who have long struggled to make sense of the Islamist phenomenon.”—David Gilmartin

“Based on rich ethnography and written with historical and theoretical imagination, this riveting book offers a timely and subtle contribution to our understanding of the place and impact of religion in public life. Humeira Iqtidar’s resonant accounts of the origins, diversity, and role of gender in Pakistan’s Islamist movements, and her deep insight that secularization can be underpinned by social forces that combat secularism, force a reconsideration of long-held concepts and convictions about politics and belief.”—Ira Katznelson