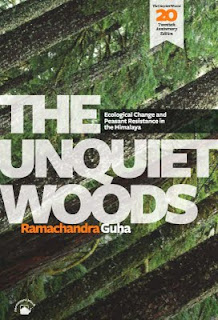 Popular initiatives to halt deforestation in the Himalaya, such as the Chipko movement, are globally renowned. It is less well known that these movements have a history stretching back more than a hundred years. A proper understanding of this long duration within the forests of submontane North India required the marriage of two scholarly traditions: the sociology of peasant protest and the ecologically oriented study of history. Twenty years ago there appeared on this subject an unknown author’s first book: The Unquiet Woods (1989) by Ramachandra Guha. Fairly quickly, the book came to be recognized as not just another study of dissenting peasants but as something of a classic which had willy nilly opened up a whole new field— environmental history in South Asia. While the monograph has as a consequence been continuously in print within India and in the West since then, its author has become a biographer and historian of international stature. In celebration of its twentieth year in print, The Unquiet Woods is now reissued with additional material: a new reflective preface by the author on the genesis and limitations of the book which set him off on the path of writerly success, as well as three freshly commissioned critical essays by major academic specialists (Amita Baviskar, Joan Martinez-Alier, and Paul Sutter). Taken together, this additional material situates the monograph and its influence within environmental history in India, Europe and Latin America, and the USA.