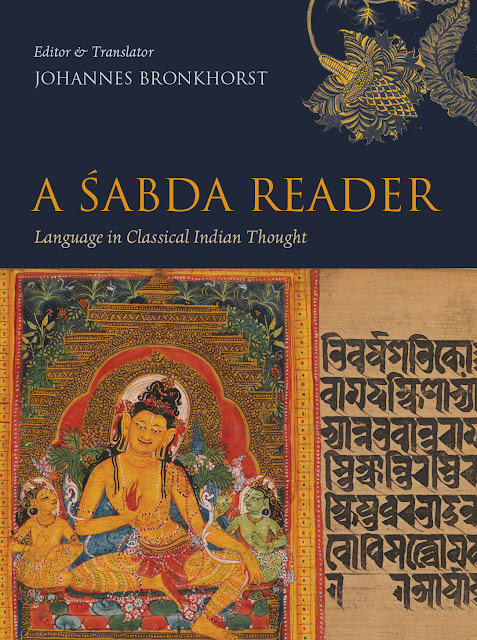 Language (śabda) occupied a central yet often unacknowledged place in classical Indian philosophical thought. Foundational thinkers considered topics such as the nature of language, its relationship to reality, the nature and existence of linguistic units and their capacity to convey meaning, and the role of language in the interpretation of sacred writings. The first reader on language in—and the language of—classical Indian philosophy, A Śabda Reader offers a comprehensive and pedagogically valuable treatment of this topic and its importance to Indian philosophical thought.

A Śabda Reader brings together newly translated passages by authors from a variety of traditions—Brahmin, Buddhist, Jaina—representing a number of schools of thought. It illuminates issues such as how Brahmanical thinkers understood the Veda and conceived of Sanskrit; how Buddhist thinkers came to assign importance to language’s link to phenomenal reality; how Jains saw language as strictly material; the possibility of self-contradictory sentences; and how words affect thought. Throughout, the volume shows that linguistic presuppositions and implicit notions about language often play as significant a role as explicit ideas and formal theories. Including an introduction that places the texts and ideas in their historical and cultural context, A Śabda Reader sheds light on a crucial aspect of classical Indian thought and in so doing deepens our understanding of the philosophy of language.

“Johannes Bronkhorst is a master of the field of Indian theories of language, and he brings his lifelong expertise to provide comprehensive coverage and lucid access to scientific thinking about language from Sanskrit classics including traditions of Sanskrit grammarians, Buddhist and Jain philosophers, Yoga, Vedānta, Mīmāmsā, Hindu logicians, and Sanskrit poetics. A Śabda Reader is going to become essential reading for anyone interested in Indian theories of language.”
—Madhav M. Deshpande, author of The Meaning of Nouns

“A Śabda Reader provides a comprehensive survey of what arguably was the world’s richest speculation on language and its nature. It was a direct exposure to this tradition in the eighteenth and nineteenth centuries that prompted the emergence of modern linguistics. The lucid nature of the exposition makes the contents easily accessible to nonspecialists and highly informative to specialists trained in South Asian languages.”
—Piotr Balcerowicz, author of Early Asceticism in India: Jīvikism and Jainism

“Never before has Indian philosophy of language been made accessible in such comprehensive, penetrating, and masterly fashion. Containing an original selection and careful translation of passages from around fifty different texts in Sanskrit, Vedic, and Pali, A Śabda Reader is an indispensable guide and sourcebook for students and scholars of India’s long, rich, and dynamic
intellectual history.”
—Jan E. M. Houben, Professor of Sanskrit, École Pratique des Hautes Études, PSL Université, Paris

“In no other tradition did speculation on language have such a strong impact on philosophical thought as in premodern India. Both Brahmanical and Buddhist philosophers, in spite of their radically conflicting views on language, brilliantly contributed to its investigation. Exploring the labyrinthine world of Indian linguistic thought, led by the firm hand of Johannes Bronkhorst, means entering Indian philosophy as a whole through the main door.”
—Raffaele Torella, author of The Philosophical Traditions of India: An Appraisal

Johannes Bronkhorst is professor emeritus of Sanskrit and Indian studies at the University of Lausanne. He is the author of a number of books, including Buddhist Teaching in India (2009) and How the Brahmins Won: From Alexander to
the Guptas (2016).