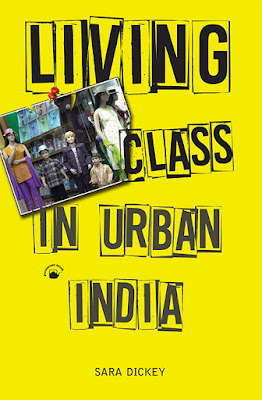 
"She achieves an extraordinarily intimate understanding of her subjects' circumstances"

Many people still envision India as rigidly caste-bound, locked in traditions that inhibit social mobility. In reality, class mobility has long been an ideal, and today globalization is radically transforming how India’s citizens perceive class. Living Class in Urban India examines a nation in flux, bombarded with media images of middle-class consumers navigating the currents of capitalism and the inequality they can produce.

Anthropologist Sara Dickey puts a human face on the issue of class in India, introducing four people who live in the “second-tier” city of Madurai: an auto-rickshaw driver, a graphic designer, a teacher of high-status English, and a domestic worker.
Drawing from over thirty years of fieldwork, she considers how class is determined by both subjective perceptions and objective conditions, documenting Madurai residents’ palpable day-to-day experiences of class while also tracking their long-term impacts. By analyzing phenomena like wedding ceremonies, religious practices, philanthropy, and loan arrangements, Dickey’s study reveals the material consequences of local class identities. Simultaneously, this gracefully written book highlights the poignant drive for dignity in the face of moralizing class stereotypes.
Through extensive interviews, Dickey scrutinizes the idioms and commonplaces used by residents to justify class inequality and, occasionally, to subvert it. Along the way, Living Class in Urban India reveals the myriad ways that class status is interpreted and performed, embedded in everything from cellphone usage to religious worship.

Sara Dickey is a professor of anthropology at Bowdoin College in Brunswick, Maine. She is the author or co-editor of several books including Cinema and the Urban Poor in South India, Home and Hegemony: Domestic Service and Identity Politics in South and Southeast Asia, and South Asian Cinemas: Widening the Lens.