September 29, 2017
“Jean Drèze is one of the world’s finest development economists. He works in a space that is widely but incorrectly ignored by most. The practical implications of evidence-based economics cannot be worked through without engaging all of society in democratic discussion, including (especially) those who are working for change. Economics itself fails without that engagement. In this collection of beautiful essays, some previously unpublished, Drèze uses economics, philosophy, and his extensive practical experience to illuminate the whole range of social policy in India. Read on!”

Jean Drèze has a rare and distinctive understanding of the Indian economy and its relationship with the social life of ordinary people. He has travelled widely in rural India and done fieldwork of a kind that few economists have attempted. This has enabled him to make invaluable contributions not only to public debates on economic and social policy but also to our knowledge of the actual state of the country.

Drèze’s insights on India’s “unfashionable” issues – hunger, poverty, inequality, corruption, and conflict – are all on display here and offer a unique perspective on the evolution of social policy over roughly the past two decades. Historic legislations and initiatives of the period, relating for instance to the right to food and the right to work, are all scrutinised and explained, as are the fierce debates that often accompanied them.

“Jholawala” has become a disparaging term for activists in the business media. This book affirms the learning value of collective action combined with sound economic analysis. In his detailed Introduction, Drèze persuasively argues for an approach to development economics where research and action become inseparably interconnected.

This is a book as much for economists as for every reading citizen.


"A wonderful book by Jean Dreze, India’s Orwell... a distinctly Orwellian anger at poverty and injustice, combined with sparse prose & forensic eye for detail. Dreze is Orwell Plus."
-- Duncan Green

"Beautifully produced, with a catchy and moving introduction...this collection is a pleasure to read. Drèze writes elegantly and passionately, shorn of rhetoric, arguing that we see India from the lens of the marginalised"
ASHWINI DESHPANDE, Professor of Economics at Delhi University, in the Indian Express

It is this combination of passion and humour, of sincerity and argumentativeness, that makes Jean Dreze's book such a compelling read. You may not always agree with the happy warrior, but you have to engage with him. Besides, he is good company!
Maitreesh Ghatak, Professor of Economics at the LSE, on NDTV

"Offers a remarkable view of these tumultuous years...Not just younger readers but even those familiar with the ground covered in the book will find it useful – occasionally startlingly – to be reminded of the distance India has travelled"
Supriya Sharma in Scroll

"The essays make a rich contribution to several ongoing debates... The right-based schemes, the debates regarding universal basic income and formulation of public policy through a democratic process owe a huge intellectual debt to the jholawalas, of which Jean Dreze is a giant. It is unfortunate that governments have been shutting down skylights, windows and doors to ideas and inputs from outside. Challenges faced by India are too complex to be resolved from fortresses atop Raisina Hill. History bears testimony to that"
Sunil Bahri reviews SENSE & SOLIDARITY in Outlook.

"Hope the book is translated into the many regional languages of India."
Huffington Post reviews Sense & Solidarity

"What distinguishes Dreze from many economists is his solidarity with the lower strata of Indian society. He has used his understanding of economics to study their day-to-day problems, of making a living, of attending to their health problems, of educating their young ones, and much more. This is the content he gives to what has come to be known as “development economics”"
C. T. Kurien in FRONTLINE

READ EXCERPTS HERE from SENSE AND SOLIDARITY, JHOLAWALA ECONOMICS FOR EVERYONE 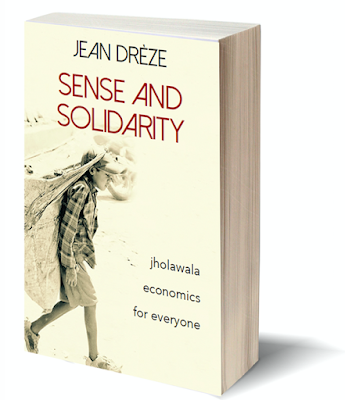 Jean Drèze studied Mathematical Economics at the University of Essex and did his PhD (Economics) at the Indian Statistical Institute. He has taught at the London School of Economics and the Delhi School of Economics, and is currently Visiting Professor at Ranchi University. He has made wide-ranging contributions to development economics, with special reference to India. He is co-author (with Amartya Sen) of Hunger and Public Action (1989) and An Uncertain Glory: India and Its Contradictions (2013). He is also one of the co-authors of the Public Report on Basic Education in India, known as the PROBE Report. Drèze is active in various campaigns for social and economic rights as well as in the world-wide movement for peace and disarmament. Since 2002, when he became an Indian citizen, he has lived and worked in India.