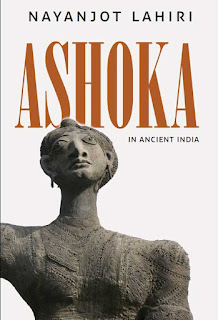 Washington, DC— Nayanjot Lahiri of Ashoka University has been selected as the winner of the 2016 John F. Richards Prize for her book Ashoka in Ancient India (Permanent Black and Harvard University Press, 2015). The Richards Prize is awarded annually by the American Historical Association (AHA) to honour the best book in South Asian history. The prize will be awarded during a ceremony at the Association’s 131st Annual Meeting in Denver, CO, in January 2017.

Professor Lahiri’s biography was edited and typeset at Permanent Black, India’s leading academic publisher, and will be available in paperback later this month. (The American edition was offset from the Indian edition and published by Harvard University Press.) The series in which the South Asia edition appears, called “Hedgehog and Fox”, conceived and managed by the Ashoka University Chancellor, Rudrangshu Mukherjee, comprises what has been widely recognized as the cream of recent historical scholarship on South Asia.

To quote from the judges’ statement: “Reversing all conventions of kingship, the Emperor Ashoka recorded his greatest military triumph as tragedy, proclaiming an order of non-violence . . . Lahiri deftly adjudicates between archaeological, textual, and geographical evidence to offer a dazzling interpretation of a remarkable figure of the ancient world and a deep history of ancient society. Her innovative linking of archaeology and biography recasts our understanding of historical methods and ancient worlds alike.”

In the introduction to this volume, historian and archaeologist Nayanjot Lahiri asks: 'Why another Ashoka?' For, the celebrated third century BC  Mauryan emperor has been the subject of numerous monographs and studies. She provides two answers.


First, Aśoka is a figure of enduring fascination to whom scholars, politicians and writers have continued to return over time, and the book is meant for a popular audience: ‘readers who enjoy digs into the past’ (p. 21). Second, and more substantively, she seeks to present ‘a narrative account of Ashoka in which a clear path that follows the trajectory of his life cuts through the jungle of legends and traditions, the epigraphs and monuments, and the archaeological facts and detail that surround them’ (p. 21). On both counts, Lahiri has delivered, presenting an accessible and engaging biography of the emperor in his time that navigates the complex terrain of available evidence.
The great challenge in an undertaking of this kind has to do with the nature of our sources. While Aśoka’s edicts are the most remarkable and personal documents of the ancient period, they cover only a few years of his reign and are silent on the rest of his life. They must be supplemented, therefore, by much later legendary accounts of uncertain historical value, primarily the Aśokāvadāna (ca. second century CE ) and the Sri Lankan Pāli chronicles Dīpavaṃsa (ca. fourth century CE) and Mahāvaṃsa (ca. fifth century CE). Anyone seeking to use them to discover the historical Aśoka will either have to present novel historiographical methods for extracting historical evidence from them or settle for a rather more speculative approach. Lahiri seeks to split the difference.
Methodologically, the book attempts to use archaeology as a historiographical touchstone: ‘The reliability of historical detail in such texts . . . can be assessed by juxtaposing them with what can be reconstructed about those times through archaeological evidence’ (p. 6). This method contributes greatly to our understanding of the world that shaped Aśoka and how considerations of locale may have influenced his messages and their reception, and the book often shifts its focus away from biographical narrative, which sometimes recedes into the distance. It is rather less successful, however, in separating the historical milk from the legendary water, and Lahiri freely recognises that any comprehensive biography of Aśoka will require speculation and that plausibility will often have to substitute for evidence (p. 104). And so the book blends legend with history to tell the story of Aśoka’s life. For the most part, Lahiri is careful to distinguish between the two, although one does occasionally detect a slippage between them.
The story Lahiri traces begins with predictions of Aśoka’s birth and extends to his death and historical afterlife. The first four chapters relate his birth, early life as a prince, dispatch to Taxila by his father Bindusāra to quell an uprising, his marriage to Devī and his viceroy ship in Ujjayinī—all as related in the legends. These tales are contextualised with abundant archaeological and geographical information about the sites where they are to have occurred: Pāṭaliputra, Taxila, Vidiśā, and Ujjayinī and the routes between. It is in these digressions into landscapes and lifeways that the present volume truly shines. The fifth chapter covers Aśoka’s bloody accession to the throne and his cataclysmic invasion of Kaliṅga, shifting in the process from legend to the firmer historical ground of the edicts. From the sixth to the eleventh chapters, there is a focus on the edicts, both their contents and their settings, as well as Aśoka’s activity as a patron of religious sites and institutions. Here, a more personal picture of the man emerges. Lahiri gives a nuanced account of Aśoka’s development, from a zealous Buddhist convert, finding his imperial voice, to a mature and repentant political visionary seeking to rule through righteousness, to Buddhist leader, to ‘an impatient and imperious old sovereign’ (p. 262) looking back on his efforts and their results, and, finally, to his wasting away in piety and grief. A brief epilogue considers Aśoka in historical memory, which confirms the image she has sketched of him ‘virtually as a Buddhist zealot . . . the archetypal Buddhist king that so often recurs seems clear evidence of how he fashioned his image’ (p. 306).
Lahiri has produced what is probably the best biography of Aśoka to date, but it is clearly written for a general audience rather than for specialists, who are apt to feel that she is more often speaking past them than engaging them. Textualists, in particular, may feel that the author is insufficiently critical in her use of sources, relying, it seems, on English translations and the textual expertise of others. As such, this book breaks no new ground in our understanding  of the sources themselves. Nevertheless, it does make significant contributions to Asokan studies, particularly by embedding  the legends and edicts in a robust archaeological  and geographic context, which yield  valuable insights into  how  the  messages were  shaped, disseminated and received. What is more, Lahiri takes seriously the internal chronology of the edicts as a means for thinking about the evolution of the man himself, something future studies will undoubtedly seek to build upon. Her interpretations of Asoka’s psychology, however, are sometimes of questionable value, as they are not always rigorously juxtaposed  with possible alternate interpretations of the textual features upon which they are based. For instance,  is Asoka's repeated  insistence in the major rock edicts that dhamma endure beyond his reign really a sign of his ‘deep insecurity’? (p. 193)  Other explanations suggest themselves.
Ashoka  in Ancient  India is a welcome  and valuable  addition to the literature on the Mauryan  dynasty. Lahiri has produced  a uniquely  accessible  volume that draws readers  into the landscapes of Mauryan India and guides  them through  a rich encounter  with the Asoka of edict  and legend.  The difficulties  in such  an undertaking are immense,  and no single approach  will satisfy all audiences.  For all of us, however, Lahiri has succeeded  in giving a more personal feel for Asoka as a man and for the places and lives of the Mauryan period, bringing us closer to this alluring and elusive personality from the past.