That Time of Year

December 23, 2015
The year's ended on a wonderfully happy note for Permanent Black, with several of our books featuring in year-end Best Book lists.

In Open, Ramachandra Guha gave a five star to BODIES OF SONG by Linda Hess:
"I have read many good books this year, none better than Linda Hess’ BODIES OF SONG: Kabir Oral Traditions and Performative Worlds in North India. This book examines the rich after-lives of a man who, with the possible exception of Tulsidas, is the most famous of all Indian poets. Dr Hess focuses on how Kabir is sung, performed, and interpreted, combining lyrical descriptions of what she saw (and heard) with subtle translations of the poetry. This is a magnificent work of scholarship, and a rollicking good read.

In Biblio,  Amita Baviskar's Book of the Year: "Thomas Trautmann’s ELEPHANTS AND KINGS: An Environmental History (Permanent Black) was the best book I read this year.. .Pulling together a vast array of sources, this erudite and engaging account greatly broadens the scope of environmental writing in India."

Also in Biblio, Steve Wilkinson's ARMY AND NATION was Vipul Dutta's Book of the Year: "A comprehensive account of the organisational principles of the Indian Army and employs a unique, inter-disciplinary methodology to address key concerns of civil-military relations in India....It is a significant addition to the scholarship on not just civil-military relations but also post-colonial ‘governance’..."

In The Indian Express, Pratap Bhanu Mehta said: "Nayanjot Lahiri’s ASHOKA IN ANCIENT INDIA was a characteristically wonderful and restrained sifting of literary, archaeological and epigraphic sources on this pivotal figure..."


In the same article, Dr Mehta said: "Another must-read historical work is Dipesh Chakrabarty’s The CALLING OF HISTORY: Sir Jadunath Sarkar and His Empire of Truth. It is a detailed archival history of the emergence of the historical profession in India, and even the emergence of the archive itself. It leaves one with a haunting question about historical methods and controversies: how did the creator of “objective” history come to be classed as a communal historian? That question says much about India and the idea of history."

The Telegraph's Books of the Year said that ELEPHANTS AND KINGS is "an enjoyable account of the diverse facets of the man-elephant relationship that has stood the test of time" and of ARMY AND NATION they say: "The depth and richness of Wilkinson’s research help unravel the subservient role that one of the largest standing armies in the world has diligently played to a democratic polity".

In a brilliant, brief interview in The Times of India Sanjay Subrahmanyam was asked
Why did you call your latest book, 'Is "Indian Civilisation" a Myth?'
And  his answer was:
"It's interesting that on Amazon a number of people who haven't even read the book have been ranting simply against the title, citing the achievements of ancient Indian metallurgy! For me, the word 'civilisation' can be problematic. It allows some people to lord it over others, claiming they alone have 'civilisation'. The only areas really allowed to have a civilisation, it seems, are Europe or the 'West', the Islamic world, India and China. There is a hierarchy between those allowed to have a civilisation and those who aren't. For example, what about the idea of African or Southeast Asian civilisations? Also, the word civilisation usually implies values frozen in time, and it's a word which can be used to shut out other people, such as shutting out Muslims from Europe by claiming they are from another civilisation. Culture to me is a far more flexible word, allowing for change. Civilisation is often used as a weapon, as a stick to beat others with." We have lots in the pipeline that is new and exciting. We'll keep coming back here to let you know about it. But for the moment, we're hanging up our kettles and getting down to some serious Christmas baking and eating.
Merry Christmas, and a very happy new year to all our readers and authors! 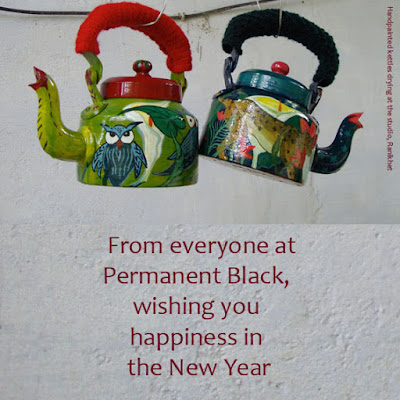