On All Fools’ Day 2015, Permanent Black will be fifteen years old. Tumultuous festivities are likely within the swarming intelligentsia of Ranikhet, the new academic hub of international thought processing in the lower Himalaya, which is where we are based for much of the year. Somewhere between 275 and 280 Permanent Black titles will have been published by then, of which 150 will have also appeared in paperback editions, and another 75 in electronic format. 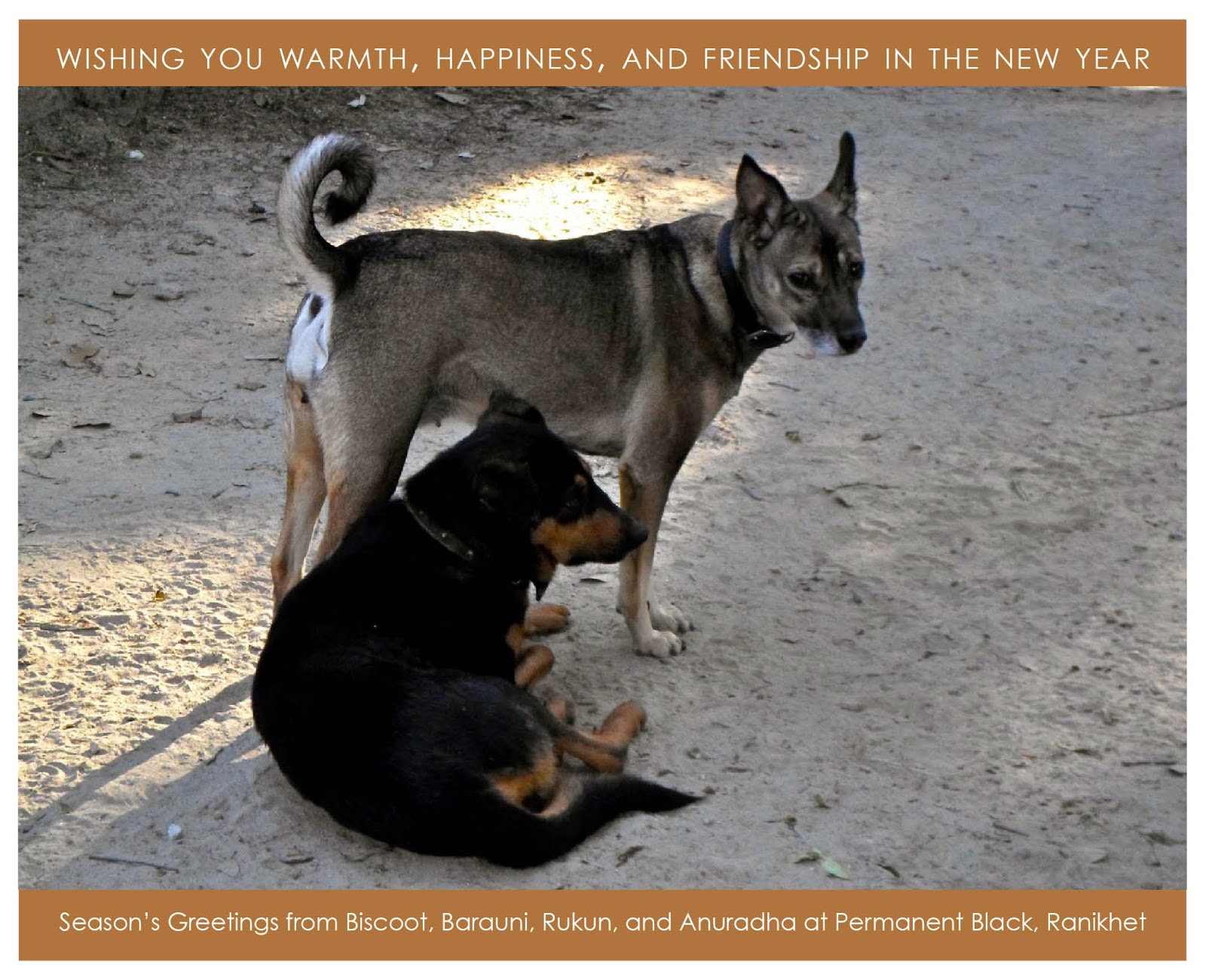 Over these years our personnel strength has increased by twenty-five per cent: one year into our life we were, in 2001, joined by our first assistant, Biscoot (stray road-Asian); fourteen years on there has been a second retruit, Barauni (stray hill-Bhutia; ‘Barauni’ being the local pronunciation of Brownie), who has also been welcomed in at the level of assistant. His promotion to managerial rank will depend on how invitingly he barks in potential authors.

Animated barking, accompanied by some fairly furious tail-wagging by these two assistants, has greatly reduced our productivity and hugely increased the happiness with which we have published. Other than the publisher Rukun Advani, and the jacket designer and general dogsbody Anuradha Roy, we remain without permanent staff, which helps keep us permanently in the black.

Over the course of our fourteenth year we have published one more clutch of first-class books in history, politics, and related areas. Sumit Sarkar’s Modern Times: India 1880s–1950s deserves most special mention because it shows Professor Sarkar performing something of a Lazarus act—he returned from many weeks in an intensive care unit to provide his huge following of fans and readers this wonderfully synthesizing narrative about the late colonial period.

Two major books to see the light of day over the past months have been Akeel  Bilgrami’s Secularism, Identity and Enchantment (copublished with Harvard University Press), and Sudipta Kaviraj’s The Invention of Private Life (originated by Permanent Black, copublished by Columbia University Press). It is an achievement for us to have become the publishers of four books by Professor Kaviraj, an academic known for his immersion in the oral tradition (conversations and lectures).  Rosalind O’Hanlon’s At the Edges of Empire appeared at the start of the year and is her second with us—a great book equally for people interested in currents of historical thought, caste and religious conflict, and aspects of society in Western India. Vasudha Dalmia’s Hindu Pasts: Women, Religion, Histories will appear soon.

M.S.S. Pandian, author of one of our finest academic bestsellers, Brahmin and Non-Brahmin, passed away with a terrible suddenness. Professor Pandian had been working on a book he had signed on with us, on contemporary Tamil politics and we’re keeping fingers crossed for his JNU colleagues to work out how that nearly finished script might be salvaged.

Nayanjot Lahiri has made quite a name for herself as a historian who can also reach readers outside university enclaves. We will publish her excellent new biography of Ashoka, entitled Ashoka in Ancient India (rights outside South Asia with Harvard University Press). And Thomas Trautmann, the American who knows more about ancient India than any other American, is publishing a fascinating environmental history of the ancient world called Elephants and Kings (copublisher: the University of Chicago Press). Both these books will appear within a new series titled ‘Hedgehog and Fox’ (for reasons not difficult to guess) that we have just begun with Ashoka University. The series editor is the new vice chancellor of Ashoka University, Rudrangshu Mukherjee (author of Awadh in Revolt, his revised Oxford PhD). A book each by Steven Wilkinson of Yale (on the Indian army), and Dipesh Chakrabarty of Chicago (on Sir Jadunath Sarkar), will follow in this series.

Books by two old friends of Permanent Black, Leela Gandhi and Mahesh Rangarajan, are in the works, as is a wonderfully readable denunciation of Perry Anderson’s The Indian Ideology by three eminent thinkers: Nivedita Menon, Partha Chatterjee, and Sudipta Kaviraj.

We wish all friends happiness among books in the new year—among our books, naturally!