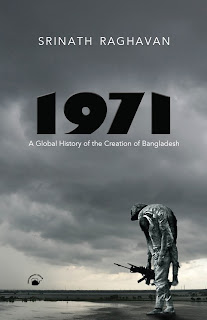 
-->
"[the book] is immensely rich in the evidence it unearths and the many dimensions that it opens up."—Rudrangshu Mukherjee, The Telegraph, Kolkata

“This is a splendidly researched book, which presents a logical well-argued case for revisiting the myths surrounding the birth of Bangladesh.”—Devangshu Datta, in Business Standard


If Srinath Raghavan breathed new life into the history of war, national diplomacy, and nation-making by taking these subjects to a new level of excellence in his earlier work, WAR AND PEACE IN MODERN INDIA, he has now similarly raised the bar for contemporary war history and international diplomacy with his new work, 1971. This isn't the publisher's view, there seems to be a growing consensus on the matter, as is apparent from the review excerpts below.

EXCERPTS FROM REVIEWS
“1971 is bound to reinforce Raghavan's reputation as a leading scholar on the security politics of India and the subcontinent … Raghavan has filled a big breach in understanding the evolution of contemporary India.” – C. Raja Mohan, Indian Express

“Starting with the rising tensions in South Asia, Raghavan uses archives from seven countries (plus the United Nations) to offer a panoramic view of the 1971 crisis … [An] impressive new histor[y].”—David C. Engerman, The Chronicle of Higher Education

“[An] absorbing and very detailed account of the creation of Bangladesh … [Raghavan] has produced an impressive analysis of the way the international community reacted to events …”—David Gilmour, Literary Review

“Raghavan has produced a scholarly study couched in sparkling prose ... He is at his best as a diplomatic historian.”—Chandrashekhar Dasgupta, Outlook

“Raghavan offers fresh insights into the 14-day war that led to the creation of Bangladesh.”—Saikat Datta, The Hindustan Times

“[Raghavan’s] superb analysis of the global intricacies of 1971 uses [a wide] lens with great precision to explain the breakup of Pakistan more convincingly than any preceding account …”—Sunil Khilnani, The New Republic

“The vastly complicated international dimension of the Indo–Pakistan War is expertly mapped out by Srinath Raghavan in 1971: A Global History of the Creation of Bangladesh … Raghavan analyzes with precision the military operations and economic realities of 1971; he also offers an indispensable array of international perspectives on the war...” —Thomas Meaney, The Nation
“[An] extremely important addition to the literature on the subject. Seven years in the making a massive amount of research has gone into it ... Much of it is new and quite revealing ... [A] piece of writing done with remarkable felicity.”—I.P. Khosla, The Book Review

“Raghavan breaks new ground by the use of archival material made available only recently ... The result is that he is able to put to rest some of the abiding myths surrounding the intervention.”—Manoj Joshi, The Hindu