SOUTH INDIA THROUGH A GLASS, SPARKLY


When Permanent Black signed on this book, the agreement was that it would include around 40-50 illustrations. In print, the book will have more than 200. How come? 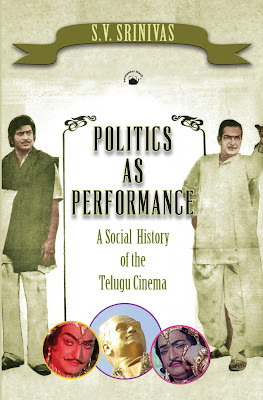 The reason is that the author is very persuasive. And he is very persuasive because he is both incredibly knowledgeable about his area of specialization, Telugu cinema, as well as enthusiastic about it to the point of being nuts. Facing a book which came in with four times the number of illustrations agreed to in the contract, it was surprisingly easy all the same for Permanent Black to say 'to hell with the agreement' because there is something quite special about this author's involvement in his subject. He has dug out an incredible array of songbook covers, film posters, and newspaper adverts from the most obscure and unknown private sources, and they are of immense value to his history.

The other thing about this book is that you don't need to be a Film Studies wallah to follow it. Srinivas has boned up on Film Studies theory and chucks in some impressive nuggets from it now and then, but he is careful to take it easy with the technicalities and jargon. He wants to reach you and me first, and Ravi Vasudevan, Madhava Prasad, and Ashish Rajadhyaksha later. (That he has also satisfied them is clear if you read to the end of this blog entry.)

Centrally, this book is a social and political history of the Andhra region written by a madly involved cinema buff. And it is brilliant, in part because it so unusual. It shows us large sections of political and cultural life in urban and hinterland South India through the camera lens. No one ever saw Hyderabad, Teluguland, the Telengana region, Rayalseema, etc. etc. the way Srinivas sees it. His perspective is genuinely fresh, his enthusiasm for the world he investigates so infectious that you'll feel caught by the throat once you start reading it.

Here is what the jacket blurb says:

This book provides a picture of the Telugu cinema, as both industry and cultural form, over fifty formative years. It argues that films are directly related both to the prominence of an elite which dominates Andhra Pradesh and other parts of India, and to the emergence of a new idiom of mass politics.

Looking in particular at the career of Andhra Pradesh’s best-known film star Nandamuri Taraka Rama Rao (NTR), S.V. Srinivas reveals how the Telugu cinema redefined ideas of linguistic identity and community feeling within a non-literate public in South India. Dissecting NTR’s remarkable election campaign of 1982–3, he shows processes of political transformation and electoral mobilization via film, newspapers, and audio cassettes. He uncovers the complicated ways in which Indian politics can be linked with movie-going and, more broadly, cultural consumption. Cinematic and political performance are shown to be inextricably connected in ways disctinctively Indian.

NTR and the Telugu cinema, Srinivas argues, have shaped important aspects of Indian political and cultural modernity. Their legacies continue into the present time—when film has yielded pride of place to television, when the future of Andhra Pradesh’s statehood is unclear, and when Indian star-politicians no longer feel certain of success in the quest for power.

S.V. SRINIVAS is Senior Fellow at the Centre for the Study of Culture and Society, Bangalore, and co-ordinator of the Culture: Industries and Diversity in Asia (CIDASIA) research programme there. He was educated at St Stephen’s College, Delhi, and the University of Hyderabad. He has taught at Arunachal University (now Rajiv Gandhi University), Doimukh, and held visiting positions at the National University of Singapore and Hokkaido University. He was ICCR Visiting Professor of Indian Culture and Society at Georgetown University for 2012–13. His publications include the book Megastar (2009) as well as many essays on popular culture as an industry.
WHAT THE BIGWIGS OF CINEMA STUDIES SAY
“This book provides a historical and theoretically informed perspective on how Telugu cinema was implicated in, and contributed to, the rise of a new ruling caste-class constellation, the emergence of the star-politician, and a new idiom of mass politics in the Andhra region ... It skilfully weaves strands of economic, political, and social history with film history and textual analysis."—Manishita Dass

“S.V. Srinivas’s Politics as Performance is an ambitious historical account of the agrarian background, caste profile, and political functions of the Telugu film industry, including a sustained narrative of the rise of N.T. Rama Rao. An exemplary text of film industrial history and political analysis, Politics as Performance makes a powerful argument for the importance of cinema studies in expanding and reconfiguring social science and historical research.”—Ravi Vasudevan

“S.V. Srinivas’s long awaited book on Telugu cinema, seen from the vantage point of movie star-politician N.T. Rama Rao’s career, radically repositions the very concept of a star, and indeed that of the cinema, within modern politics. His site of inquiry, Andhra Pradesh, reveals an extraordinarily complex twentieth-century social and economic landscape, and the further manifestation of that landscape in one of India's largest film industries opens up new definitions of film narrative, the film industry, and the overall film economy. This approach to the cinema provides a completely new frontier for the discipline of film studies.”—Ashish Rajadhyaksha

“Unusually for these times, this is a work of film history that does not ignore the larger socio-economic realities of which any culture industry is a part. Indeed it seeks to demonstrate how the channels of mutual determination between socio-economic, political, and cultural instances work in practice. The Telugu film industry, one of the biggest in India, will now be assured of its place in Indian film history with Srinivas’s comprehensive, interdisciplinary study.” —M. Madhava Prasad

Ranjani Mazumdar
Bombay Cinema
An Archive of a City

Mukul Kesavan
The Ugliness of the Indian Male and Other Propositions