Before the Atom Bomb 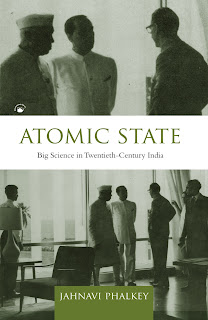 It's a great new telling of the birth of nuclear India from the 1930s to the late 1950s. Jahnavi Phalkey is a lecturer in the history of sci-tech at King's College London and, long back, her PhD won the annual Sardar Patel Award for the best dissertation submitted at an American university on a South Asian topic. Since then she's been beavering away revising, discovering more material, rethinking and reformulating -- all the usual things that careful scholars spend years agonizing over before a publisher wrenches the script away from them. (JNU has at least two brilliant historians, Neeladri Bhattacharya and Indivar Kamtekar, who are still chewing their fingernails revising their PhDs: Permanent Black has assured them posthumous publication as well as medical expenses for possible onychomycosis. Curiously, these two share a birthday, so there may be something to astrology.)

Phalkey demonstrates with hard evidence and irrefutable logic that the connections so frequently argued between the Indian "peaceful nuclear explosions" of 1974 and the early years of nuclear research were at best tenuous and at worst non-existent. The folks at the TIFR Bombay, the IISc. Bangalore, and University Science College in Calcutta didn't have atom bombs in their heads when they set about trying to procure cyclotrons for their labs. Phalkey says the dots connecting them with the Thar Desert explosions constitute a falsely retrospective reading. The academic term among historians for making up a story when there isn't one is 'teleological argument'. A teleological argument is a very bad thing. Phalkey shows us how bad, and does so rivetingly. So, from her book we find out a lot about C.V. Raman, Homi Bhabha (the comprehensible first version), Meghnad Saha, Shanti Swarup Bhatnagar, and others less famous; and a little bit about how historians cook up stories and, disregarding hard facts, make teleological arguments. Phalkey, broadly in line with the school of thought that includes Meera Nanda, shows science as a 'universal' pursuit much more than a culturally specific practice.

In brief, a book to look out for. Plenty of luminaries say so:

“Is there an Indian way of doing science? All too often, the answer to this question has raised the possibility of alternative scientific worldviews. Phalkey's outstanding study shows that the answer must vary according to the viability of alternative practices among scientists working in a particular discipline. Unlike their colleagues in medicine or the social sciences, Indian physicists have fully claimed as their own the universal practices of doing physics. And like big science everywhere, nuclear physics could only be done with state support. Phalkey shows with meticulous care the political desires that brought together the practices of scientific knowledge production and the priorities of state leaders. A valuable addition to the growing literature on the history of independent India.”—Partha Chatterjee

“Jahnavi Phalkey has written a closely argued work which shows the tensions inherent even within Indian nationalism on the matter of science. The book is empirically rich, using hitherto unseen private archives. Beyond this empirical richness, it is located squarely within an argumentative tradition of linking science and political economy, but also a tradition where science is never simply reduced to politics. Its fluent style and accessible character mean that this book can be read not just by historians of science but by all those who are curious about the many paradoxes of South Asian state-building and modernity.”—Sanjay Subrahmanyam

“By examining the emergence of nuclear physics in India between the late 1930s and mid-1950s, Phalkey unravels a complex story of competing individuals and rival institutions. She shows in lucid detail how a crucial branch of theoretical and applied science struggled, across the colonial divide, to function and find support. She presents a compelling picture not only of why some scientists failed and others succeeded but also of how the pursuit of nuclear science became a hallmark of India’s modernity and an adjunct to state power. An original, intelligent and timely book, Atomic State will help provoke a radical reassessment of what science in twentieth-century India was for and who were its beneficiaries.”—David Arnold

“Jahnavi Palkey’s new work is a very important step in focusing in on the single field of nuclear physics in India and its practice around accelerators and cyclotrons from the 1940s. She uncovers a ‘messy social terrain of crises’, and explores how three accelerators at three labs actually came (and sometimes didn’t come) into operation. Using what she calls ‘the small instruments of empirical history’, Palkey makes clear the disconnection of much of this physics research and development from ‘building the bomb’, and shows other purposes and ambitions at work. The fascinating role of persons and personalities like Raman, Saha, Bhatnagar and Bhabha is not missed (nor of their lesser known colleagues of the time), leaving readers with a deeper appreciation of how these crises were managed, and to whose loss and whose benefit.” —Robert Anderson