"The Jawaharlal Nehru University administration has asked historian Romila Thapar to submit her curriculum vitae so that it can decide if she should continue as professor emerita, The Telegraph reported on Sunday. Thapar had retired from the university in 1991 and was made professor emerita two years later.

An emeritus position is an honour conferred by the university on a retired professor in appreciation of their past work. Once chosen, an academic typically continues in the post throughout, unidentified JNU faculty members told The Telegraph.

The university’s website already has Thapar’s CV, though seemingly an earlier version.

“It is a very unfortunate thing,” Thapar told Anandabazar. “We are going through a strange time. Emeritus is not a mere designation. It is an honour related to the university’s goodwill.”

The scandalous and bumbling effort to dishonour

Romila Thapar has caused an uproar throughout

the reading world and resulted in at least one


The great academic book often gestates for a very long period before it appears in print and, like wines of a high quality, acquires body, maturity, and distinction as it ripens in the author’s mind. In the high-calibre territory of history-writing informally referred to as Ancient India, Sheldon Pollock’s The Language of the Gods in the World of Men (700pp; published by the University of California Press, copublished by Permanent Black) is the most recent work of this monumental variety. For the obvious reasons, such books appear only once in a very long while. The scholar’s intellectual stamina needs to be exceptional. The book needs to be driven by big ideas. The end result needs to show massive scholarship, elegance in thought and style, and a range far beyond the capacities of normal human beings.

The next one in this genre of great books, originating at Permanent Black and copublished by Harvard University Press, is Romila Thapar’s The Past Before Us: Historical Traditions of Early North India (776pp).


At some point in the early 1990s a series called ‘Themes in Indian History’ was initiated, and among the book possibilities discussed for that series were three historiographical volumes, one each for the ancient, medieval, and modern phases of Indian history. They were envisaged, at the time, as edited volumes: Romila Thapar, Muzaffar Alam and Sanjay Subrahmanyam, and Chris Bayly being thought of as the people to edit them. As is common in publishing, the editor proposes but the author disposes. About forty edited volumes appeared in the series, but they did not include surveys of historiography.

Meanwhile, the interest in answering a key question—does South Asia provide evidence of historical writing amounting to a historical tradition?—took several directions, all implicitly disputing James Mill's imperial disdain. Among the many works tackling the idea, several appeared from Permanent Black, including Textures of Time by V.A. Narayana Rao, David Shulman, and Sanjay Subrahmanyam; Creative Pasts by Prachi Deshpande; Assam and India by Yasmin Saikia; and History in the Vernacular, edited by Raziuddin Aquil and Partha Chatterjee.

Some years back the Cambridge philosopher Simon Blackburn, inheritor of the chair which Bertrand Russell once occupied, was asked to edit a volume called The Oxford Companion to Philosophy. Instead of the considerable bother involved in inviting contributions from distinguished scholars, Blackburn simply wrote the whole damn Companion all by himself. This is roughly what Romila Thapar seems to have done—not bothering with a ‘Themes in Indian History’ editorial job, she preferred to make the whole blessed thing with her own sweat and blood.

This took a mere twenty-five years of making notes, cannibalizing from her earlier papers, rethinking historical issues written up in different formats, and writing large chunks out for the first time. Not a long time, given that Ancient India stretches over twenty-five hundred or so years. Perhaps not even a long time for Romila Thapar, in her early eighties now, hale and hearty and feisty as ever.

The years spent in thinking and writing the book show to good effect: very little is missed out, virtually everything you can think of in relation to the subject finds a place in here. Greek and European History. Chinese History. Islamic Historical Traditions. Herodotus to Hinduism, Iliad to Indica. The range is fascinating and unusual because South Asian historical forms and traditions are seen in relation to forms and traditions thrown up by other contexts. The result is a mindstopper that's also a doorstopper. The original script weighed in at 240,000 words; it cost Romila Thapar blood, sweat, and a lot of tears to trim it down to 200,000 words. The exercise of shortening involved her and Permanent Black in several months of mutually wonderful consultation and editorial work (all supervised by her lovely white labrador Amba) splicing, excising, mauling, chopping, discarding, rewriting, tweaking, restitching. Whole sections within chapters were pushed down (what Partha Chatterjee might call) The Black Hole of Ancient India. Hands were thrown up in the air at several points. Do the seams show? We think not.

Romila Thapar raises this theme—Did My Earliest Forefathers Do What I’ve Been Doing?—to an entirely new level. Her book is a colossal survey of every kind of writing in early India that might be said to be an attempt to record the past. The first four pages, reproduced below, indicate a work that will be ‘necessary reading’ for anyone with a serious interest in Indian history. The questions asked are so fundamental, and the interpretive magnificence with which they are discussed is so compelling, that this isn’t a book which any of Ancient India’s pigeonholes and caves can accommodate. Medievalists and modernists are warned that they too will need to clear 52 millimetres (two full inches) in their bookshelves to allow for its girth. They will think it worth the while: it isn’t every day that you get to buy the first edition of what will soon be recognized as a classic. 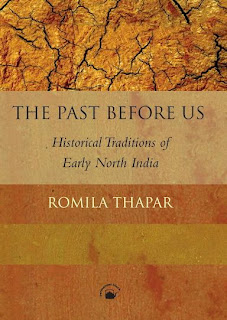