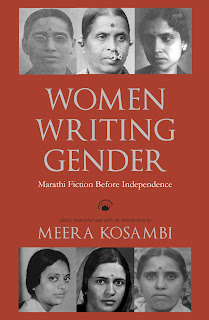 Most modern literatures were initially dominated by men who claimed, at times, to speak for women. But when given an opportunity, women spoke differently.

This book tells the several stories of how Maharashtrian women found a ‘voice’ in the late nineteenth century. It shows how they created a literary space for themselves, deploying fiction to depict worlds other than those available in male writing, as well as dreams and aspirations unseen in society before they were articulated by their fiction. Having been excluded from mainstream prose, women also created a parallel reform discourse which displayed various shades of feminism.

After an introductory overview of men and women writers of Marathi fiction before Independence, this book presents in translation the work of six iconic women writers: Kashibai Kanitkar, Indirabai Sahasrabuddhe, Vibhavari Shirurkar, Geeta Sane, Shakuntala Paranjpye, and Prema Kantak. Their novels and short stories unfold the journeys of articulate women towards new paradigms, and ultimately towards a demand for gender equality—which is women’s gift to Marathi literature.

MEERA KOSAMBI is a sociologist trained in India, Sweden, and the US. She has specialized in Urban Studies and Women’s Studies. She was Professor and Director of the Research Centre for Women’s Studies at the SNDT Women’s University in Mumbai. She has taught, lectured, and published widely in India and abroad. Her books include Returning the American Gaze: Pandita Ramabai’s ‘The Peoples of the United States’ (1889) (2003), Crossing Thresholds: Feminist Essays in Social History (2007), and Feminist Vision or ‘Treason against Men’? Kashibai Kanitkar and the Engendering of Marathi Literature (2008).