ANNE FELDHAUS ON FACETS OF SCHOLARSHIP IN MAHARASHTRA 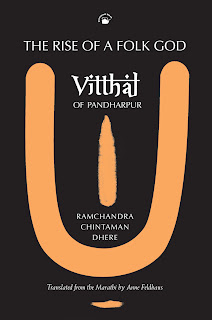 The Rise of a Folk


Translated from the Marathi by Anne Feldhaus


RAMCHANDRA CHINTAMAN DHERE is widely known as the foremost scholar of religious traditions in Maharashtra.


Soon after she published her translation of this book, Permanent Black engaged in the following


Q. An influential view of the current state of historical and literary scholarship pertaining to India is that of Sheldon Pollock, who remarks: "the number of citizens capable of reading and understanding the texts and documents of the  classical era—or precolonial or premodern or pre-1800 era, all equivalent terms for my purpose here—will very soon approach a statistical zero. India is about to become the only major world culture whose literary patrimony, and indeed history, are in the custodianship of scholars outside the country: in Berkeley, Chicago, and New York; Oxford, Paris, and Vienna. This would not be healthy either for India or for the rest of the world that cares about India." Does this critique also apply to Maharashtra, and to what degree?

A. This does apply to Maharashtra. Although there is a lively contemporary Marathi literary scene, few people in Maharashtra today go to the trouble to study Old and Middle Marathi. One important exception that Pollock does not mention is the large number of pious people who read Old- and Middle-Marathi texts ascribed to the Vārkarī poet-saints (Jnaneshvar, Namdev, Eknath, Tukaram, and the others), and other pre-modern religious texts such as the Gurucaritra. People do not simply read or recite those texts as a kind of magical chant. They worry about what the words mean. This can be seen in the “sa-artha” editions of such texts that are readily available in the market – editions that present the original text and also give its meaning in modern Marathi.


Q. Could you give us a sense of what attracted you to Indian religion and what brings you so often to Maharashtra?

A. I first went to Maharashtra as a college student in 1970. I loved the landscape and the warmth and humor of many people I met. I liked the ritualization of daily life that I saw in the Hindu family I lived with there, and also the rituals in the temples and shrines I visited. I was attracted by what I sensed (but did not yet know) to be the complexity of the Hindu traditions that I saw. That religious complexity, which I later learned extends to Jain, Muslim, Buddhist, Christian, Parsi, and Jewish traditions as well, continues to draw me to Maharashtra.
Most importantly, though, I made friends with people in that first visit who are still friends of mine today. I wanted to be able to talk with people who did not speak English, and so I studied Marathi and then made many more friends with whom I could talk about many things that are important in their lives. (You can read about my struggles with Marathi, and also with wearing a sari, at this link: http://dept.arth.upenn.edu/meister/feldhaus.html)

Q. What fascinated you so much about the history of Vitthal worship that you undertook this translation, and what were some of the difficulties you had to overcome while doing it?

A. I was disappointed that scholars without access to Marathi knew little or nothing of the work of R.C. Dhere. I thought that by making his book on the history of Vitthal available to them, I could increase by tenfold the world’s knowledge about that most important god in Maharashtra. In 1984, as soon as the book was published, I proclaimed publicly that I would translate it into English. I started then, but got bogged down with other work. Then in 2006 I got some time with just my computer, some Marathi dictionaries, and my copy of Dhere’s book, so I finished off the translation then.
In order to become a scholarly work in English, the book needed to be rearranged somewhat. I changed the order of part of the argument (especially in the early chapters), added some explanations that are not there in the Marathi (most of these are in the form of “translator’s notes” in the footnotes, but some are now embedded in the text itself), and omitted some material. Some of what I omitted was simply too specialized for scholars who do not know Marathi and/or Sanskrit (parts of Chapter 13, for example, on the “Vedicization of Vitthal”).


Q. Other than R.C. Dhere, who are the major Marathi scholars you feel the English-speaking world doesn’t know about but should?

A. Durga Bhagwat, Prabhakar Mande, Sadanand More, V. B. Kolte. I hope  readers of this blog will remind me of more.

Q. If you had to recommend five Marathi classics (fiction, non-fiction, poetry, any genre at all) to the non-Marathi world, which would these be and why?

A. Lilacaritra, an Old-Marathi text, for its concrete portrayal of everyday life in 13th-century Maharashtra.

Dilip Chitre’s Punhā Tukārām, which is quite different from the introduction to his anthology of English translations of Tukārām, Says Tuka, for its cultural critique.

Sadashiv Atmaram Jogalekar’s 1952 book (Maharashtra-Stotra) Sahyadri, for its exaggerated and imaginative religious-geographical rhetoric (which I suspect emerged from and contributed to the Samyukta Maharashtra movement, though I have not found proof of this).

I haven’t read enough Marathi fiction or poetry or drama to be able to pick and choose among the wealth that is available. Recently I’ve been reading a 1962 novel by the well-known Marathi poet Pu. Shi. Rege. The novel is called Sāvitrī, and I’m grateful to the new friend who found me a copy of it.

Q. Could you name six books OUTSIDE your disciplinary area that have meant a great deal to you in some deeply personal way, or constituted you in some defining way?
A. Plato’s Dialogues

Sigmund Freud’s The Future of an Illusion (I’m cheating here, as this is a book that is read in my field, religious studies.  I could also add here Marx and Engels On Religion and Durkheim’s The Elementary Forms of the Religious Life.)

Hegel’s The Phenomenology of Mind

Vitthal, also called Vithoba, is the most popular Hindu god in the western Indian state of Maharashtra. He is also among the best-known gods outside India. His temple at Pandharpur attracts one of the largest and most elaborate annual pilgrimages in the world.

This book is the foremost study of the history of Vitthal, his worship, and his worshippers. First published in Marathi in 1984, it remains the most thorough and insightful work on Vitthal and his cult in any language, and provides an exemplary model for understanding the history and morphology of lived Hinduism.

Vitthal exemplifies the synthesis of Vaishnava and Shaiva elements that not only typifies Maharashtrian Hindu religious life but also marks Vitthal’s resemblance to the prominent South Indian god Venkatesh of Tirupati in Andhra Pradesh.

Dhere's analysis highlights Vitthal’s connection with pastoralist hero cults, and demonstrates the god’s development from a god of shepherds to a god of the majority of the population. In addition, Dhere explores the connections of Vitthal with Buddhist and Jain traditions.

The book’s final chapter presents a culminating stage in the evolution of the worship of Vitthal: the interpretation in spiritual terms of the god, his temple, the town of Pandharpur, and the river that flows past the town.