On the Cup that Cheers


Empire’s Garden
Assam and the Making of India 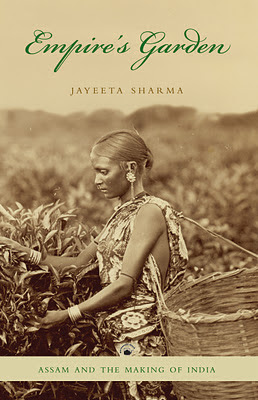 Jayeeta Sharma
In the mid-nineteenth century the British created a landscape of tea plantations in the north-eastern Indian region of Assam. The tea industry filled imperial coffers and gave the colonial state a chance to transform a jungle-laden frontier into a cultivated system of plantations. Claiming that local peasants were indolent, the British soon began importing indentured labour from central India. In the twentieth century these migrants were joined by others who came voluntarily to seek their livelihoods.
In Empire’s Garden, Jayeeta Sharma explains how the settlement of more than one million migrants in Assam irrevocably changed the region’s social landscape. She argues that the racialized construction of the tea labourer catalyzed a process by which Assam’s gentry sought to insert their homeland into an imagined Indo-Aryan community and a modern Indian political space. Various linguistic and racial claims allowed these elites to defend their own modernity while pushing the burden of primitiveness onto “non-Aryan” indigenous tribals and migrant labourers. As vernacular print arenas emerged in Assam, so did competing claims to history, nationalism, and progress that continue to reverberate in the present.
“Jayeeta Sharma’s subject is the creation of the notion of ‘Assam’ during the pre-colonial and colonial periods, both as a literary artefact and as a region defined by its relationship to the wider India. She wants to know how, when, and why the Assamese came to see themselves as different, particularly from Bengalis and from the Muslims of what is now Bangladesh. She is also interested in how some subordinate groups within the province were incorporated into the idea of a Hindu Assamese identity and others not … Dr Sharma has made a major contribution to the reassessment which is now under way of what might be called ‘regional patriotisms’, both in India and throughout  Asia. Her wider theoretical and historical interests in the emergence of ‘ethnicities’ or ‘micro-nations’ also put her work in the vanguard of developments in the social sciences more generally.”—C.A. Bayly
“Empire’s Garden is a new departure for the historical study of Assam, extraordinarily wide-ranging, with important things to say not only about Assam but about India, South Asia, and themes ranging from colonialism, nationalism, and regionalism to ethnicity, elite formation, migration, and economic development. It will anchor histories of Assam for years to come.”—David Ludden
“This rich history of Assam fills a void in scholarship. Assam is an area of South Asia that has received little attention from serious historians of the subcontinent, except those working on the tea industry. Jayeeta Sharma provides us with fascinating details of Assam’s history. More importantly, she relates local themes to larger issues of South Asian history: colonial ideologies of race and the importance of these ideologies to the political economy, the structure of colonial rule, the development of the public sphere, and the reformulation of identities under colonial circumstances. Empire’s Garden also helps us to understand the historical dimensions of contemporary conflicts in the region, without making the conflicts seem predetermined by what happened in the colonial period.”—Douglas E. Haynes
JAYEETA SHARMA is Assistant Professor of History, University of Toronto.
Hardback /  348pp / Rs 750 /  ISBN 81-7824-343-1 / October 2011 / South Asia rights
COPUBLISHED WITH DUKE UNIVERSITY PRESS