One More from the Enfant Terrible of Med Ind and the Med Cosmos ... 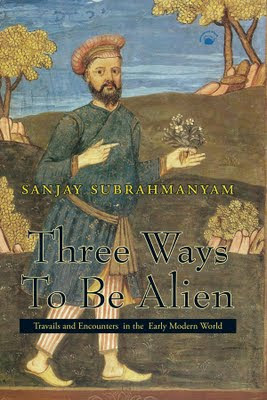 This book looks at individual trajectories in an early modern global context. It draws on the lives and writings of a trio of marginal figures who were cast adrift from their traditional moorings into an unknown world.

v  a “Persian” prince of Bijapur in Central India held hostage by the Portuguese at Goa
v  an English traveller and global schemer whose writings reveal a nimble understanding of realpolitik in the emerging world of the early seventeenth century
v  an insightful Venetian chronicler of the Mughal Empire in the later seventeenth century who drifted between jobs with the Mughals and various foreign entrepôts, observing all but remaining the eternal outsider

In telling the fascinating story of floating identities in a changing world, Subrahmanyam injects humanity into global history and shows that biography still plays an important role in contemporary historiography.

“Through case-studies of three quite remarkable ‘aliens’ and ‘border-crossers’ Sanjay Subrahmanyam has given us a startling new vision into the intricacies and the day-to-day realities of the always unsteady, always conflictual nature of cultural ‘encounters’ across and within the European and Muslim empires of the early-modern world. With his wry humor, keen eye for detail, and gift for startling juxtaposition, no one can match him.”—Anthony Pagden

“Integrating biography, microhistory, and world history in the study of cultural border crossers, Subrahmanyam’s book will probably initiate a whole new generation of studies in the field of cultural encounters in which individual lives figure prominently. Few scholars in the world can match his mastery of the political and economic history of the Early Modern empires of Asia and Europe, or the ease with which he crosses historiographical traditions to bring their history together in this lucid and innovative study.”—Stuart B. Schwartz