WAS THERE LIFE BEFORE BOLLYWOOD?

June 30, 2011
Stages of Life
Indian Theatre Autobiographies
KATHRYN HANSEN
“These four autobiographies of artists and writers who shaped early Indian theatre during its most creative period are as riveting as the fare that the theatre itself provided. Kathryn Hansen’s lifelong and perceptive involvement with that rumbustious enterprise infuses every word of her translation of these texts.”

By the end of the nineteenth century, Western-style playhouses were found in every Indian city.  Professional drama troupes held crowds spellbound with their spectacular productions. 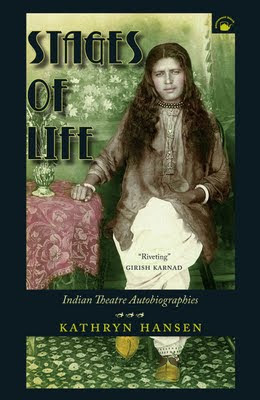 From this colorful world of entertainment come the autobiographies in this book.

The life-stories of a quartet of early Indian actors and poet-playwrights are here translated into English for the first time.

The most famous, Jayshankar Sundari, was a female impersonator of the highest order. Fida Husain Narsi also played women's parts, until gaining great fame for his role as a Hindu saint. Two others, Narayan Prasad Betab and Radheshyam Kathavachak, wrote landmark dramas that ushered in the mythological genre, intertwining politics and religion with popular performance.

These men were schooled not in the classroom but in large theatrical companies run by Parsi entrepreneurs. Their memoirs, replete with anecdote and humor, offer an unparalleled window onto a vanished world. India’s late-colonial vernacular culture and early cinema history come alive here. From another perspective, these narratives are as significant to the understanding of the nationalist era as the lives of political leaders or social reformers.

This book includes four substantive chapters on the history of the Parsi theatre, debates over autobiography in the Indian context, strategies for reading autobiography in general, and responses to these specific texts. The apparatus, based on the translator’s extensive research, includes notes on personages, performances, texts, vernacular usage, and cultural institutions.

KATHRYN HANSEN is a leading scholar of South Asian theatre history, especially the Hindi and Urdu traditions of North India. Her work has highlighted heroic women in myth and history, theatrical transvestism in the nationalist period, composite culture and cosmopolitanism, and community formation through theatrical performance. She has authored Grounds for Play: The Nautanki Theatre of North India, translated The Parsi Theatre: Its Origins and Development, and co-edited A Wilderness of Possibilities: Urdu Studies in Transnational Perspective. Having taught at the University of British Columbia, the University of Chicago, and Rutgers University, she is now Professor in the Department of Asian Studies at the University of Texas at Austin.


“Kathryn Hansen has given us a special kind of book—one with many voices, on many layers, which cohere in a single, satisfying picture. Autobiographical accounts of early pioneers of the Parsi theatre are enriched by the author’s considerable knowledge of this theatre, its performance styles and people and languages. This well-produced book includes original thinking about a number of topics, including autobiographical writing in India, its history in India and first-person narratives as a form of cultural memory. The narratives themselves, which lie at the heart of the book, are lovingly translated, combining humour, flare and intimacy. They read as they were written and bring us inside this world where stages of life were sung and danced and spoken under the lights.”—Stuart Blackburn


Click  HERE  for an interview with Kathryn Hansen in TimeOut Mumbai