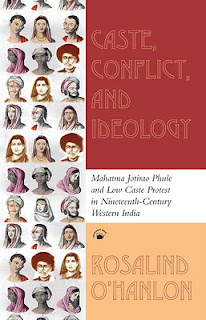 
This is the first Indian reprint, with a new preface by the author, of a classic work which was first published in 1985.

The nineteenth century saw the beginning of a violent and controversial movement of protest amongst western India’s low and untouchable castes, aimed at the effects of their lowly position within the Hindu caste hierarchy. The leaders of this movement were convinced that religious hierarchies had combined with the effects of British colonial rule to produce inequality and injustice in many fields, from religion to politics and education.

This study concentrates on the first leader of this movement, Mahatma Jotirao Phule. It shows him as its first ideologist, working out a unique brand of radical humanism. It analyses his contribution to one of the most important and neglected social developments in western India in this period—the formation of a new regional identity.

This process of identity formation is studied against the background of the earlier history of caste relations, and contributes important evidence about the relationship between ritual status and political power. The author draws extensively on vernacular language materials and evidence about popular culture from oral traditions.

ROSALIND O’HANLON is Professor of Indian History and Culture in the Faculty of Oriental Studies, University of Oxford. Her publications include A Comparison Between Women and Men: Tarabai Shinde and the Critique of Gender Relations in Colonial India, and numerous articles on the social history of colonial and early modern India.