WORLDS AWAY FROM RACISM: BRILLIANT AUSTRALIAN SCHOLAR WRITES ON INDIA 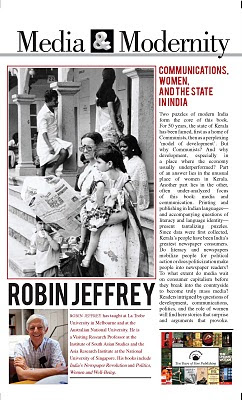 Communications, Women, and the State in India

Two puzzles of modern India—one well known, the other overlooked—form the core of this book.

For fifty years, the state of Kerala has been famed, first as a home of Communists, then as a perplexing ‘model of development’. But why Communists? And why development, especially in a place where the economy usually underperformed even lowly national averages? Part of an answer lies in the unusual place of women in Kerala and their changing role in the past 200 years.

Another part lies in the other, often under-analyzed focus of this book: media and communication. Printing and publishing in Indian languages—and accompanying questions of literacy and language identity—present tantalizing puzzles.

Since data were first collected in the 1950s, Kerala’s people have been India’s greatest newspaper consumers. Do literacy and newspapers mobilize people for political action or does politicization make people into newspaper readers? To what extent do media wait on consumer capitalism before they break into the countryside to become truly mass media, as they have in India in the past thirty years?

Media and Modernity ponders these questions, first from the perspective of Kerala, often a forerunner of developments elsewhere, and then at an all-India level. Readers intrigued by questions of development, communications, politics, and the role of women will find in this collection stories that surprise and arguments that provoke.

ROBIN JEFFREY, arguably Australia’s best-known academic analyst of Indian cultural history and politics, has been a Professor at the Australian National University and Dean of the College of Asia and the Pacific. He is currently a Visiting Research Professor at the Institute of South Asian Studies in Singapore. His several books include India’s Newspaper Revolution (2000) and Politics, Women, and ‘Well-Being’ (1993).