SCHOLARLY SANITY ON A MAJOR AREA OF INDIAN WORRY 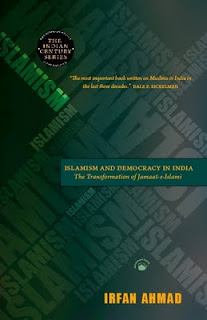 
Jamaat-e-Islami Hind is the most influential Islamist organization in India today. Founded in 1941 by Syed Abul Ala Maududi with the aim of spreading Islamic values in the subcontinent, Jamaat and its offshoot, the Student Islamic Movement of India (SIMI), has been watched closely by Indian security services since 9/11. In particular, SIMI has been accused of being behind terrorist bombings.

Islamism and Democracy in India is the first in-depth examination of India’s Jamaat-e-Islami and SIMI. It explores political Islam’s complex relationship with democracy and gives us a rare window into one immensely significant Islamic trajectory in a Muslim-minority context.

Irfan Ahmad conducted extensive ethnographic fieldwork at a school in Aligarh, among student activists at Aligarh Muslim University, at a madrasa in Azamgarh, and during Jamaat’s participation in elections in 2002. He deftly traces Jamaat’s changing position towards India's secular democracy and the group’s gradual ideological shift in the direction of religious pluralism and tolerance. He demonstrates how the rise of militant Hindu nationalism since the 1980s—evident in the destruction of the Babri mosque and widespread violence against Muslims—led to SIMI’s radicalization, its rejection of pluralism, and its call for jihad.

Islamism and Democracy in India argues that when secular democracy is responsive to the traditions and aspirations of its Muslim citizens, Muslims in turn embrace pluralism and democracy. But when democracy becomes majoritarian and exclusionary, Muslims turn radical.

IRFAN AHMAD is an anthropologist and assistant professor of politics in the School of Political and Social Inquiry at Monash University in Australia, where he helps lead the Centre for Islam and the Modern World.

THIS BOOK IS PUBLISHED IN PERMANENT BLACK'S 'THE INDIAN CENTURY' SERIES, OF WHICH THE GENERAL EDITORS ARE RAMACHANDRA GUHA AND SUNIL KHILNANI

“This is an outstanding historical and ethnographic account of one of the most influential Islamist movements in South Asia. It is the result of courageous fieldwork at a time of increased Hindu-Muslim tension in India. The book's thesis that even a radically antisecular Islamist movement can be transformed into supporting secular democracy is an extremely important contribution to today's global discussions. It is essential reading for political scientists, sociologists, anthropologists, historians, and students of Islam.”—Peter van der Veer

“Irfan Ahmad's book could not be more timely or important. At a time when clichés about ‘Islamists’ and ‘Islamic terrorists’ abound, he demonstrates the ideological transformation of one of the twentieth century’s most important Islamist movements, India’s Jamaat-e-Islami, in support of active participation in a secular, plural democracy. Ahmad’s work is essential reading not only for scholars, but for policymakers and concerned citizens alike.”—Barbara D. Metcalf

“This is the most important book written on Muslims in India in the last three decades. Ahmad traces the incremental shift of most adherents of Jamaat-e-Islami to moderation and participation in Indian democracy, showing that from its inception the movement has been thoroughly modern. He deals with an aspect of India that is frequently neglected and engages the main debates concerning the relation of Islam to democracy.”—Dale F. Eickelman