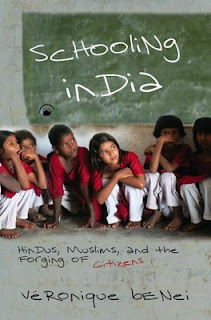 This book explores an important yet often overlooked aspect of nationalism—its embodied and emotional dimensions. It does so by focusing on a neglected area, that of elementary education in the modern state.

Through an ethnographic study of primary schools in western India, Véronique Benei examines the idioms through which teachers, students, and parents make meaning of their political world. She articulates how urban middle- and lower-class citizens negotiate the processes of self-making through the minutiae of daily life at school and extracurricular activities, ranging from school trips to competitions and parent gatherings.

To document how processes of identity formation are embodied, Benei draws upon historical and cultural repertoires of emotionality and language-use. Her book shifts the normal focus of attention away from apocalyptic communal violence—she looks instead at everyday or ‘banal nationalism’. Attentive to the formulation of ‘senses of belonging’, she explores the sensory production and daily manufacture of nationhood and citizenship, as well as how nationalism is nurtured in a nation’s youth.

Historians, sociologists, students of politics and nationalism as well as educationists will be enriched by this careful and detailed study of the often ignored nuances involved in the making of communities such as Hindus and Muslims within the framework of the Indian nation.

VÉRONIQUE BENEI is Visiting Senior Fellow at the London School of Economics, Department of Anthropology where she has taught since 1997, and holds a permanent position as Senior Research Fellow with the Centre National de la Recherche Scientifique (LAIOS/IIAC). She has also taught at Princeton University and Yale University.

“Benei's compelling ethnography is much more than a book about schooling; it’s about schooling in the service of the nation, how schooling functions to create citizens, and how nationalism is inculcated in our youth. I have seldom read a more powerful, beautifully written book.”—Susan Wadley

“ … a major contribution to the study of nationalism and to the burgeoning field of anthropology of emotions … a rich ethnographic study of mundane educational practices based on a deep understanding of their historical context. She pays meticulous attention to the details of language use, to songs and to the everyday disciplines of schooling … analyses emotions and the corporeal, while also reminding us that language is at the heart of cultural and political passions: what matters is how, when, and in which style, one declares one's love for the nation.” —Thomas Blom Hansen

“ … examines the role played by schooling in the production of nationalist identities … a highly nuanced account of political acculturation. She skilfully illustrates how her ideas mesh with other theoretical work and intersperses her detailed account with reflections on the wider comparative implications of her study … looks beyond the immediate and sometimes superficial changes that accompanied the rise of Hindu Nationalism …”— Craig Jeffrey