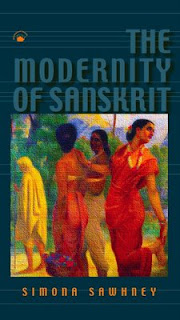 THE MODERNITY OF SANSKRIT by Simona Sawhney

IF YOU THOUGHT that Sanskrit and its canonical texts validate the Hindutva worldview, this book will make you think again. It shows how writers such as Tagore and Gandhi deployed the Indian literary and religious canon to argue broadly liberal positions, and how it is both possible and necessary to view the possibilities of political plenitude within texts misappropriated by the Hindu Right.

“A passionate plea, made with erudition and conviction, for taking new stock of the modern engagement with Sanskrit, not only in Hindi lyric, drama, and essay, but also in the new political readings of texts as safely ‘classical’ as the Bhagavadgita.” —Vasudha Dalmia, Professor of Hindi, University of California, Berkeley

“Three predictions come to mind upon reading The Modernity of Sanskrit. First, it will blow the current field of Sanskrit Studies apart. Second, it will wake up practitioners of various literary studies disciplines — particularly the one that is conventionally and comfortably called Comparative Literature — to the existence of literature written in the Sanskrit language and a genetically linked literature, that written in Hindi. Third, it will show just how salient, sensible, and stimulating scholarly discourse on South Asia can be.” —Clinton B. Seely, University of Chicago

“The Modernity of Sanskrit is a brilliant and beautiful study of canonical works in the Sanskrit tradition. The prose is consistently engaging, moving, and convincing, and Sawhney’s close readings are a delight.”—Henry Schwartz, Georgetown University